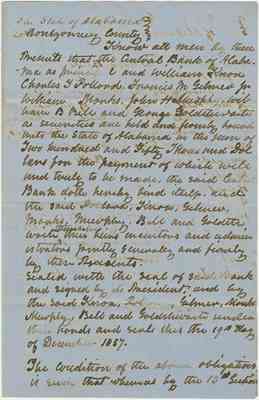 The State of Alabama) Montgomery County)

Know all men by these presents that the Central Bank of Alabama as principal and William Knox Charles Y Pollard, Francis M Gilmer Jr William Monks, John H Murphy, Wil liam B Bell and George Goldthwaite as securities are held and firmly bound unto the State of Alabama in the sum of Two hundred and Fify Thousand Dol lars for the payment of which well and truly to be made, the said Central Bank doth hereby bind itself, and the said Pollard, Knox, Gilmer, Monks, Murphy, Bell and Goldth waite themselves their heirs executors and admin istrators jointly severally and firmly by these Accounts.

Sealed with the seal of said Bank and signed by its President and by the said Knox, Pollard, Gilmer, Monks, Murphy, Bell and Goldthwaite under their hands and seals this the 19th day of December 1857. 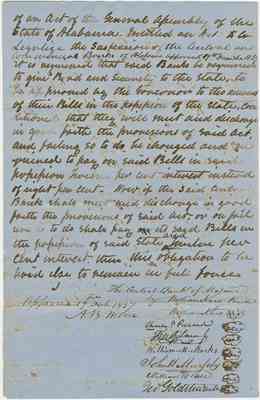 of an act of the General Assembly of the State of Alabama, Entitled an Act to Legalize the suspension of the Central and commercial Banks of Alabama approved 19th December 1857 it is required that said Banks be required to give 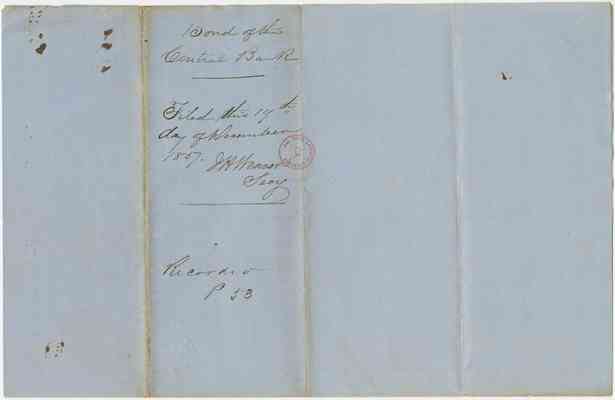 Bond of the Central Bank

Last edit 7 days ago by MaryV
Displaying all 3 Page