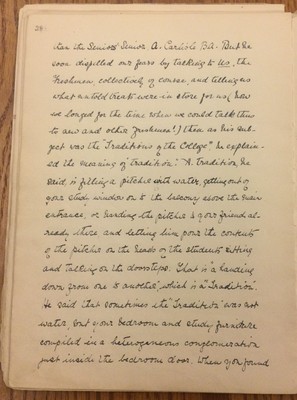 than the Senior's Senior, A. Carlisle B.A. But he soon dispelled our fears by talking to us, the Freshmen, collectively of course, and telling us what untold treats were in store for us (how we longed for the time when we could talk thus to new and other Freshmen!) then as his subject was the "Traditions of the College", he explained the meaning of "tradition". A tradition, he said, is filling a pitcher with water, getting out of your study window on to the balcony above the main entrance, or handing the pitcher to your friend, already there, and letting him pour the contents of the pitcher on the heads of the students sitting and talking on the doorsteps. That is "a handing down from one to another", which is a "Tradition". He said that sometimes the "Tradition" was not water, but your bedroom and study furniture compiled in a heterogeneous conglomeration just inside the bedroom door. When you found 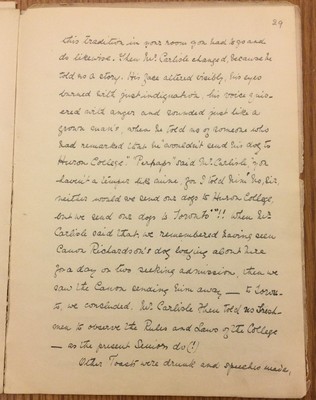 this tradition in your room you had to go and do likewise. Then Mr. Carlisle changed, because he told us a story. His face altered visibly, his eyes burned with just indignation, his voice quivered with anger and sounded just like a grown man's, when he told us of someone who had remarked that he "couldn't send his dog to Huron College". "Perhaps" said Mr. Carlisle, "you haven't a temper like mine, for I told him 'No, sir, neither would we send our dogs to Huron College, but we send our dogs to Toronto' "!! When Mr. Carlisle said that, we remembered having seen Canon Richardson's dog loafing about here for a day or two seeking admission, then we saw the Canon sending him away - to Toronto, we concluded. Mr. Carlisle then told us Freshmen to observe the Rules and Laws of the College - as the present Seniors do (!)

Other Toasts were drunk and speeches made, 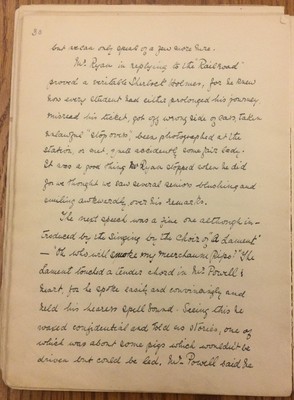 but we can only speak of a few more here.

Mr. Ryan in replying to the "Railroad" proved a veritable Sherlock Holmes, for he knew how every student had either prolonged his journey, misread his ticket, got off wrong side of cars, taken unlawful "stop overs", been photographed at the station, or met quite accidentally some fair lady. It was a good thing Mr. Ryan stopped when he did for we thought we saw several seniors blushing and smiling awkwardly over his remarks.

The next speech was a fine one although introduced by the singing by the Choir of "A Lament" - "Oh who will smoke my Meerchaum Pipe?" The Lament touched a tender chord in Mr. Powell's heart, for he spoke easily and convincingly and held his hearers spell bound. Seeing this he waxed confidential and told us stories, one of which was about some pigs which wouldn't be driven but could be led. Mr. Powell said he 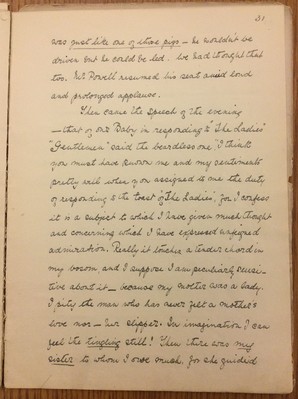 was just like one of those pigs - he wouldn't be driven but he could be led. We had thought that too. Mr. Powell resumed his seat amid loud and prolonged applause.

Then came the speech of the evening - that of our Baby in responding to "The Ladies" "Gentlemen" said the beardless one. "I think you must have known me and my sentiments pretty well when you assigned to me the duty of responding to the toast of "The Ladies", for I confess it is a subject to which I have given much thought and concerning which I have expressed unfeigned admiration. Really it touches a tender chord in my bosom, and I suppose I am peculiarly sensitive about it - because my mother was a lady. I pity the man who has never felt a mother's love nor - her slipper. In imagination I can feel the tingling still! Then there was my sister to whom I owe much, for she guided 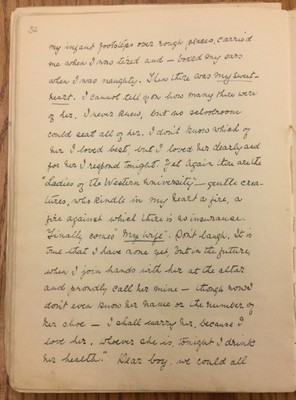 my infant footsteps over rough places, carried me when I was tired and - boxed my ears when I was naughty. Then there was my sweetheart. I cannot tell you how many there were of her. I never knew, but no schoolroom could seat all of her. I don't know which of her I loved best, but I loved her dearly and for her I respond tonight. Yet again there are the "Ladies of the Western University" - gentle creatures, who kindle in my heart a fire, a fire against which there is no insurance. Finally comes "My Wife". Don't laugh, It is true that I have none yet, but in the future, when I join hands with her at the altar and proudly call her mine - though now I don't even know her name or the number of her shoe - I shall marry her, because I love her. Whoever she is, tonight I drink her health". Dear boy, we could all