AIATSIS Code: D23
AIATSIS Reference name: Gamilaraay / Gamilaroi / Kamilaroi
Gamilaraay, Yuwaalaraay D27, Yuwaalayaay D54, Guyinbaraay D15, Waalaraay D55, Wirraay-Wirraay D28 and Gawambaraay D39 are in a dialectal relationship. Some people (for example, Ash, Giacon, and Lissarrague 2003) use the term Gamilaraay as the language name for these dialects. According to Austin, Williams and Wurm (1980:169), there is a distinction between Northern Gamilaraay and Gamilaraay Proper. The former is a northern dialect which covers the area between the Barwon and Gwydir Rivers while the latter covers the area from Walgett south as far as Willow Tree on the edge of the Great Dividing Range. Austin (2008:38) reports that the Gamilaraay (D23) language revival movement has improved the status and use of the language.
See: https://collection.aiatsis.gov.au/austlang/language/d23 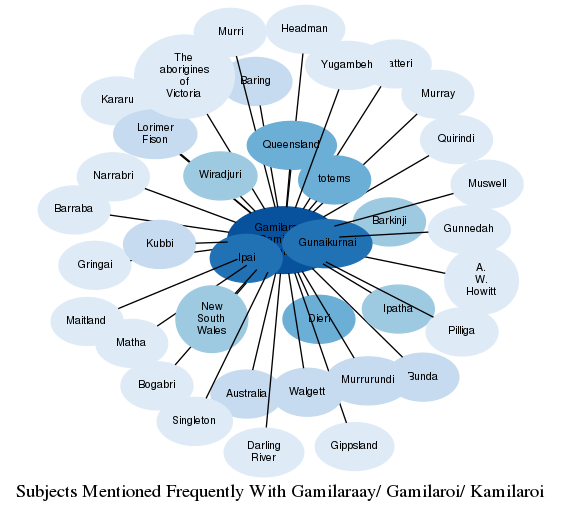 The graph displays the other subjects mentioned on the same pages as the subject “Gamilaraay”. If the same subject occurs on a page with “Gamilaraay” more than once, it appears closer to “Gamilaraay” on the graph, and is colored in a darker shade. The closer a subject is to the center, the more "related" the subjects are.

Show pages that mention Gamilaraay in all works