A.L.P. Cameron was born in Victoria and later became a grazier in the Riverina district of NSW. Cameron's letters to Howitt and his many published works in rural newspapers and academic journals contain vocabularies and ethnographic commentaries of a high quality. His obituary noted that 'it was claimed... that few were better versed than he in aboriginal folk lore, and in the language and dialects of the Australian blacks'. 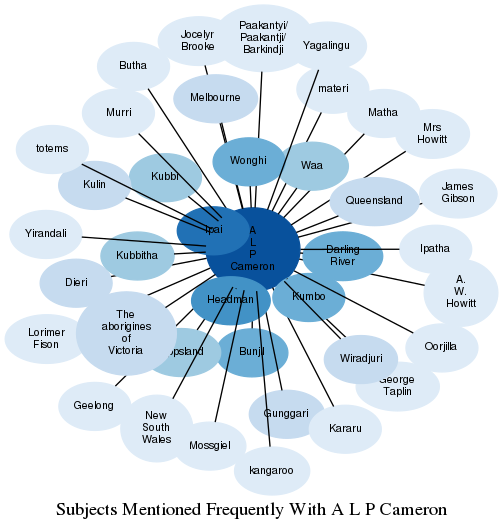 The graph displays the other subjects mentioned on the same pages as the subject “Cameron”. If the same subject occurs on a page with “Cameron” more than once, it appears closer to “Cameron” on the graph, and is colored in a darker shade. The closer a subject is to the center, the more "related" the subjects are.

Show pages that mention Cameron in all works