Nominated by G. F. Bowen to be a Member of the first Legislative Council of QueenslandSir William Thomas Denison (1804-1871), governor-general, was born on 3 May 1804 in London, son of John Denison and his second wife Charlotte, née Estwick. Like his brothers Evelyn (Viscount Ossington) and Edward (bishop of Salisbury) he went to Eton; he later entered the Royal Military College, graduating in 1826 as a lieutenant in the Royal Engineers. He worked on the Rideau Canal in Canada and won the prized Telford silver medal for an essay on timbers. He returned to England in 1832 and was the first editor of Papers on Subjects Connected with the Duties of the Corps of Royal Engineers. He also instructed engineer cadets at Chatham where he set up an observatory, and later as an Admiralty officer he supervised the building and repair of dockyards and other works at Portsmouth, Woolwich and Bermuda. In November 1838 he married Caroline, daughter of Sir Phipps Hornby.

In April 1846 Gladstone dismissed Sir John Eardley-Wilmot from Van Diemen's Land and appointed Denison as lieutenant-governor. Earl Grey, who succeeded Gladstone, endorsed Denison's appointment and had him knighted. After five months in the Colonial Office Denison sailed from Spithead and reached Hobart Town on 25 January 1847. He came with preconceived notions about punishment. To him its purpose was to deter: convicts were evil-doers and talk of their reform was 'maudlin sentimentality'. Since he believed that 'idleness … is at the root of ninety crimes out of a hundred', he wanted imprisonment to be accompanied by enforced labour, the prisoners to be encouraged by the prospect of tangible rewards with provision for their separate confinement when not at work or meals or during their instruction. His conviction was that 'to everyman the full penalty which the law allots to his offence should be meted out'. (https://adb.anu.edu.au/biography/denison-sir-william-thomas-3394)Commissioner for New South Wales at the Paris Exhibition of 1855 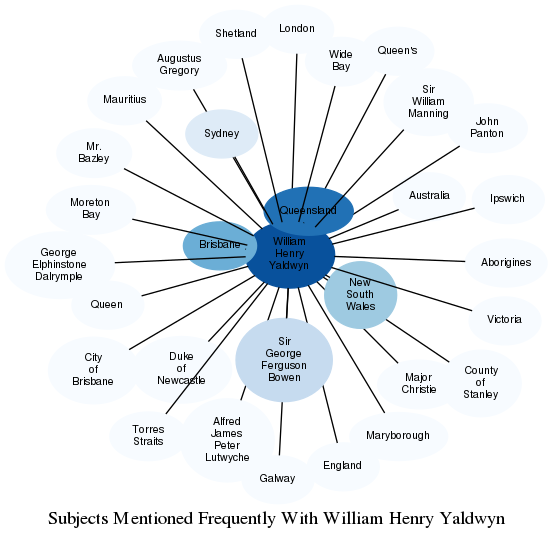 Show pages that mention William Henry Yaldwyn in all works