AIATSIS code: S69
AIATSIS reference name: NGARRINDJERI
The Ngarrindjeri 'nation' and language is associated with the country on the Lower Murray River and in the Murray Lakes and Coorong region of South Australia. The community of Raukkan on the southern shores of Lake Alexandrina (formerly known as Point McLeay) is considered by many as a major hub of Ngarrindjeri country (Gale & French 2005). ... "a great triangle of land" extending from the western extremity of Cape Jervis on the tip of the Fleurieu Peninsula, north to Swanport on the Murray River (about 5 kms south of Murray Bridge) and south around Lake Alexandrina and Lake Albert, and stretching further south along the Coorong to Kingston. (Taplin 1879, in Gale and French 2005:2). Contemporary location : Murray Bridge and communities in the Riverland (Gale & French 2005:2).
See: https://collection.aiatsis.gov.au/austlang/language/s69 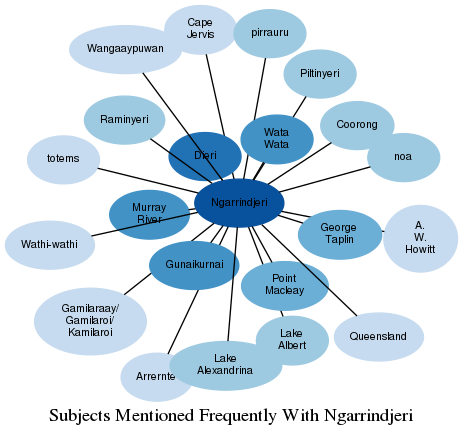 Only search text of pages which do not link to Ngarrindjeri