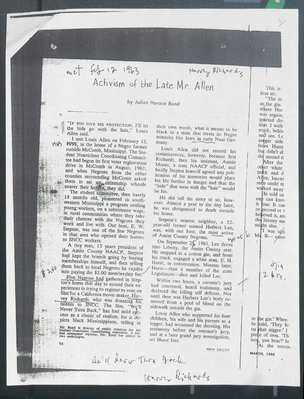 "If you give me protection, I'll let the hide go with the hair," Louis Allen said.

I met Louis Allen on February 12, 1963, in the home of a Negro farmer outside McComb, Mississippi. The Student Nonviolent Coordinating Committee had begun its first voter registration drive in McComb in August, 1961, and when Negroes from the other counties surrounding McComb asked them to set up citizenship schools nearer their homes, they did.

The student committee, then barely 18 months old, pioneered in southwestern Mississippi a program settling young workers, on a subsistence wage, in rural communities where they take their chances with the Negroes they work and live with. Our Host, E. W. Steptoe, was one of the few Negroes in that area who opened their homes to SNCC workers.

A tiny man, 15 years president of the Amite County NAACP, Steptoe had kept the branch going by buying memberships himself, and then selling them back to local Negroes he cajoles into paying $2.00 $2.00 membership fee.

Five Negroes had gathered in Steptoe's home that day to record their experiences in trying to register to vote on film for a California movie maker, Harvey Richards, who was donating his talents to SNCC. The film, "We'll Never Turn Back," has had mild success as a classic of realism, for it depicts black Mississippians, telling in

their own words, what it means to be black in a state that treats its Negro minority like Jews in early Nazi Germany.

Louis Allen did not record his reminiscences, however, because first Richards, then his assistant, Amzie Moore, a state NAACP official, and finally Steptoe himself agreed any publication of his memories would place his life further in danger and that the "hide" that went with the "hair" would be his.

He did tell his story to us, however. Almost a year to the day later, he was shotgunned to death outside his home.

Steptoe's nearest neighbor, a 52year-old farmer named Herbert Lee, was, with our host, the most active of Amite County Negroes.

On September 25, 1961Sept 25 '61, Lee drove into Liberty, the Amite County seat. He stopped at a cotton gin, and from his truck, engaged a white man, E. H. Hurst, in conversation. Minutes late, Hurst -- then a member of the state Legislature -- shot and killed Lee.

Within two hours, a coroner's jury had convened, heard testimony, and declared the killing self defense. Not until then was Herbert Lee's body removed from a pool of blood on the sidewalk outside the gin.

Louis Allen who supported his four children, his wife and his parents as a logger, had witnessed the shooting. His testimony before the coroner's jury, and at a later grand jury investigation, set Hurst free. 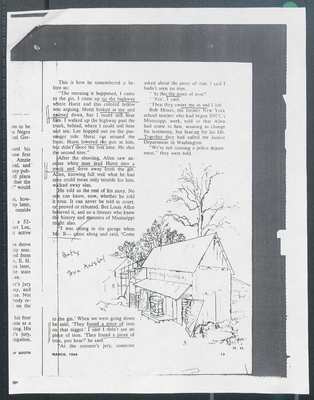 This is how he remembered it before us:

"The morning it happened, I came to the gin. I came up on the highway where Hurst and this colored fellow was arguing. Hurst looked at me and quieted down, but I could still hear him. I walked up the highway past the truck, behind, where I could still hear and see. Lee hopped out on the passenger side. Hurst ran around the front. Hurst lowered the gun at him, but didn't shoot the first time. He shot the second time."

After shooting, Allen saw another white man lead Hurst into a truck and drive away from the gin. Allen, knowing full well what he had seen, could mean only trouble for him, walked away also.

He told us the rest of his story. No one can know, now, whether he told it true. It can never be told in court, or proved or rebutted. But Louis Allen believed it, and so a listener who knew the history and manners of Mississippi might also.

"I was sitting in the garage when Mr. B -- came along and said, `Come

"At the coroner's jury, someone

asked about the piece of iron. I said I hadn't seen no iron.

"Then they swore me in and I left."

Bob Moses, the former New York school teacher who had begun SNCC's Mississippi work, told us that Allen had come to him, wanting to change his testimony, but fearing for his life. Together they had called the Justice Department in Washington.

"We're not running a police department," they were told. 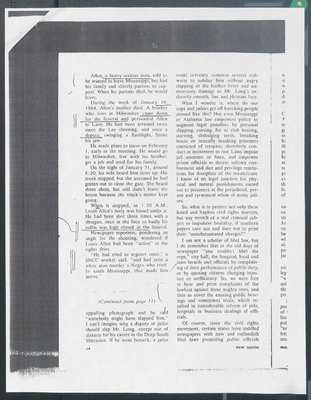 Allen, a heavy serious man, told us he wanted to leave Mississippi, but had his family and elderly parents to support. When his parent died, he would leave.

During the week of January 19, 1964, Allen's mother died. A brother who lives in Milwaukee came down for the funeral and persuaded Allen to leave. He had been arrested twice since the Lee shooting, and once a deputy, swinging a flashlight, broke his jaw.

He made plans to leave on February 1, early in the morning . He wold go to Milwaukee, live with his brother, get a job and send for his family.

On the night of January 31, around 8:30, his wife heard him drive up. His truck stopped, but she assumed he had gotten out to close the gate. She heard three shots, but still didn't leave the house because the truck's motor kept going.

When it stopped, at 1:30 A.M., Louis Allen's body was found under it. He had been shot three times with a shotgun, once in the face so badly his coffin was kept closed at the funeral.

Newspaper reporters, pondering an angle for the shooting, wondered if Louis Allen had been "active" in the rights drive.

"He had tried to register once," a SNCC worker said, "and had seen a white man murder a Negro who tried In south Mississippi, that made him active."

appalling photograph and he said "somebody might have slapped him" I can't imagine why a deputy or jailor should slap Mr. Long, except out of distate for his career in the Deep South liberation. If he went bersek, a jailor

Last edit about 1 month ago by Jannyp
All 3 records