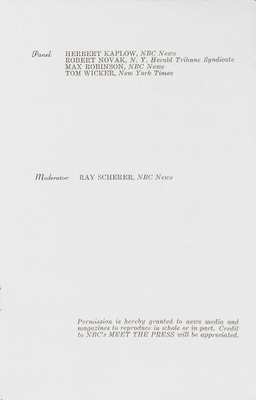 Permission is hereby granted to news media and magazines to reproduce in whole or in part. Credit to NBC's MEET THE PRESS will be appreciated. 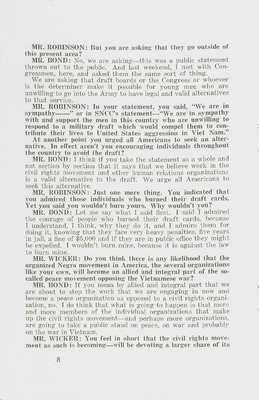 MR. ROBINSON: But are you asking that they go outside of this present area? MR. BOND: No, we are asking--this was a public statement thrown out to the public. And last weekend, I met with Congressmen, here, and asked them the same sort of thing. We are asking that draft boards or the Congress or whoever is the determiner make it possible for young men who are unwilling to go into the Army to have legal and valid alternatives to that service. MR. ROBINSON: In your statement, you said, "We are in sympathy--" or in SNCC's statement-- "We are in sympathy with and support the men in this country who are unwilling to respond to a military draft which would compel them to contribute their lives to United States aggressions in Viet Nam." At another point you urged all Americans to seek an alternative. In effect aren't you encouraging individuals throughout the country to avoid the draft? MR. BOND: I think if you take the statement as a whole and not section by section that it says that we believe work in the civil rights movement and other human relations organizations is a valid alternative to the draft. We urge all Americans to seek this alternative. MR. ROBINSON: Just one more thing. You indicated that you admired those individuals who burned their draft cards. Yet you said you wouldn't burn yours. Why wouldn't you? MR. BOND: Let me say what I said first, I said I admired the courage of people who burned their draft cards, because I understand, I think, why they do it, and I admire them for doing it, knowing that they face very heavy penalties, five years in jail, a fine of $5,000 and if they are in public office they might be expelled. I wouldn't burn mine, because it is against the law to burn mine. MR. WICKER: Do you think there is any likelihood that the organized Negro movement in America, the several organizations like your own, will become an allied and integral part of the so-called peace movement opposing the Vietnamese war? MR. BOND: If you mean by allied and integral part that we are about to stop the work that we are engaging in now and become a peace organization as opposed to a civil rights organization, no. I do think that what is going to happen is that more and more members of the individual organizations that make up the civil rights movement--and perhaps more organizations, are going to take a public stand on peace, on war and probably on the war in Vietnam. MR. WICKER: You feel in short that the civil rights movement as such is becoming--will be devoting a larger share of its 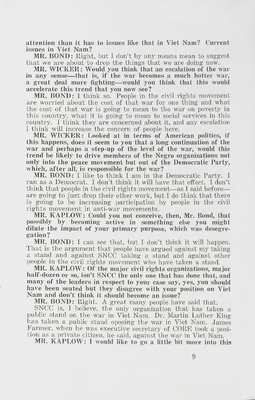 attention than it has to issues like that in Viet Nam? Current issues in Viet Name? MR. BOND: Right, but I don't by any means mean to suggest that we are about to drop the things that we are doing now. MR. WICKER: Would you think that an escalation of the war in any sense--that is, if the war becomes a much hotter war, a great deal more fighting--would you think that this would accelerate this trend that you now see? MR. BOND: I think so. People in the civil rights movement are worried about the cost of that war for one thing and what the cost of that war is going to mean to the war on poverty in this country, what it is going to mean to social services in this country. I think they are concerned about it, and any escalation I think will increase the concern of people here. MR. WICKER: Looked at in terms of American politics, if this happens, does it seem to you that a long continuation of the war and perhaps a step-up of the level of the war, would this trend be likely to drive members of the Negro organizations not only into the peace movement but out of the Democratic Party, which, after all, is responsible for the war? MR. BOND: I like to think I am in the Democratic Party. I ran as a Democrat. I don't think it will have that effect. I don't think that people in the civil rights movement--as I said before-are going to just drop their other work, but I do think that there is going to be increasing participation by people in the civil rights movement in the anti-war movements. MR. KAPLOW: Could you not conceive, then, Mr. Bond, that possibly by becoming active in something else you might dilute the impact of your primary purpose, which was desegregation? MR. BOND: I can see that, but I don't think it will happen. That is the argument that people have argued against my taking a stand and against SNCC taking a stand and against other people in the civil rights movement who have taken a stand. MR. KAPLOW: Of the major civil rights organizations, major half-dozen or so, isn't SNCC the only one that has done that, and many of the leaders in respect to your case say, yes, you should have been seated but they disagree with your position on Viet Nam and don't think it should become an issue? MR. BOND: Right. A great many people have said that. SNCC is, I believe, the only organization that has taken a public stand on the war in Viet Nam. Dr. Martin Luther King has taken a public stand opposing the war in Viet Nam. James Farmer, when he was executive secretary of CORE took a position as a private citizen, he said, against the war in Viet Nam. MR. KAPLOW: I would like to go a little bit more into this 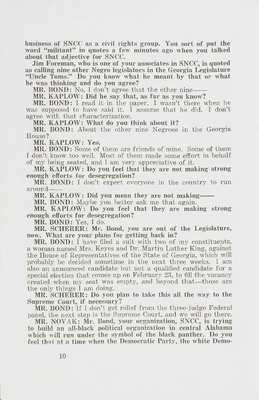 business of SNCC as a civil rights group. You sort of put the word "militant" in quotes a few minutes ago when you talked about that adjective for SNCC. Jim Foreman, who is one of your associates in SNCC, is quoted as calling nine other Negro legislators in the Georgia Legislature "Uncle Toms." Do you know what he meant by that or what he was thinking and do you agree? MR. BOND: No, I don't agree that the other nine-MR. KAPLOW: Did he say that, as far as you know? MR. BOND: I read it in the paper. I wasn't there when he was supposed to have said it. I assume that he did. I don't agree with that characterization. MR. KAPLOW: What do you think about it? MR. BOND: About the other nine Negroes in the Georgia House? MR. KAPLOW: Yes. MR. BOND: Some of them are friends of mine. Some of them I don't know too well. Most of them made some effort on behalf of my being seated, and I am very appreciative of it. MR. KAPLOW: Do you feel that they are not making strong enough efforts for desegregation? MR. BOND: I don't expect everyone in the country to run around-MR. KAPLOW: Did you mean they are not making-MR. BOND: Maybe you better ask me that again. MR. KAPLOW: Do you feel that they are making strong enough efforts for desegregation? MR. BOND: Yes, I do. MR. SCHERER: Mr. Bond, you are out of the Legislature, now. What are your plans for getting back in? MR. BOND: I have filed a suit with two of my constituents, a woman named Mrs. Keyes and Dr. Martin Luther King, against the House of Representatives of the State of Georgia, which will probably be decided sometime in the next three weeks. I am also an announced candidate but not a qualified candidate for a special election that comes up on February 23, to fill the vacancy created when my seat was empty, and beyond that--those are the only things I am doing. MR. SCHERER: Do you plan to take this all the way to the Supreme Court, if necessary? MR. BOND: If I don't get relief from the three-judge Federal panel, the next step is the Supreme Court, and we will go there. MR. NOVAK: Mr. Bond, your organization, SNCC, is trying to build an all-black political organization in central Alabama which will run under the symbol of the black panther. Do you feel that at a time when the Democratic Party, the white Demo- 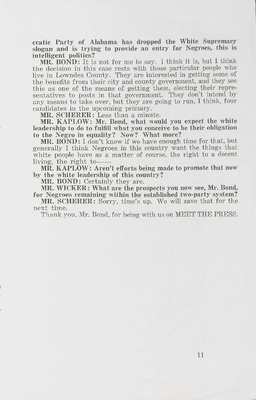 cratic Party of Alabama has dropped the White Supremacy slogan and is trying to provide an entry for Negroes, this is intelligent politics? MR. BOND: It is not for me to say. I think it is, but I think the decision in this case rests with those particular people who live in Lowndes County. They are interested in getting some of the benefits from their city and county government, and they see this as one of the means of getting them, electing their representatives to posts in that government. They don't intend by any means to take over, but they are going to run, I think, four candidates in the upcoming primary. MR. SCHERER: Less than a minute. MR. KAPLOW: Mr. Bond, what would you expect the white leadership to do to fulfill what you conceive to be their obligation to the Negro in equality? Now? What more? MR. BOND: I don't know if we have enough time for that, but generally I think Negroes in this country want the things that white people have as a matter of course, the right to a decent living, the right to-MR. KAPLOW: Aren't efforts being made to promote that now by the white leadership in this country? MR. BOND: Certainly they are. MR. WICKER: What are the prospects you now see, Mr. Bond, for Negroes remaining within the established two-party system? MR. SCHERER: Sorry, time's up. We will save that for the next time. Thank you, Mr. Bond, for being with us on MEET THE PRESS.