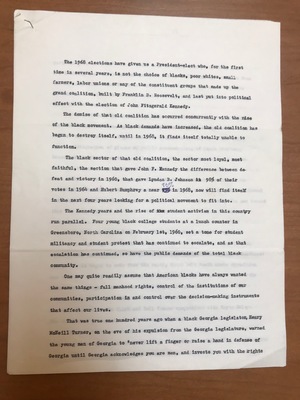 The 1968 elections gave us a President-elect who, for the first time in several years, was not the choice of blacks, poor whites, small farmers, labor unions or any of the constituent groups that made up the grand coalition, built by Franklin D. Roosevelt. It was last put into political effect during the election of John Fitzgerald Kennedy.

The black sector of the old coalition, most loyal and faithful, that helped John F. Kennedy win the Election of 1960, gave Lyndon B. Johnson 98% of their votes in 1964 and Hubert Humphrey a near 90% in 1968, now found itself looking for a political movement to fit into for the next four years.

The Kennedy years and the rise of student activism in this country ranparallel as well. Four young black college students at a lunch counter in Greensboro, North Carolina on February 1st, 1960, set a tone for student militancy and student protest that has continued to escalate, and as that escalation has continued, so have the public demands of the whole Black community.

One may quite readily assume that African-Americans have always wanted the same things - full manhood rights, control of the institutions of our communities, participation in and control over the decision-making instruments that affect our lives.

That was true one hundred years ago when a Black Georgia legislator, Henry McNeill Turner, on the eve of his expulsion from the Georgia legislature, warned the young men of Georgia to "never lift a finger or raise a hand in defense of Georgia until Georgia acknowledges you are men, and invests you with the rights 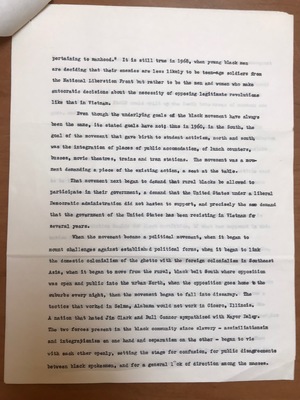 pertaining to manhood." It is still true in 1968, when young black men are deciding that their enemies are less likely to be teen-age soliders from the National Liberation Front but rather to be the men and women who make autocratic decisions about the necessity of opposing legitimate revolutions like that in Vietnam.

Even though the underlying goals of the Black movement have always been the same, its stated goals have not. Thus, in 1960, the goal of the movement that gave birth to student activities, north and south, was the integration of places of public accomodation, of lunch counters, buses, movie theatres, trains and train stations. The movement was a movement demanding a piece of the existing action, a seat at the table.

The movement demanded that rural blacks be allowed to participate in their government, a demand that the United States under a liberal Democratic administration did not hasten to support, and precisely the same demand that the government of the United Sates has been resisting in Vietnam for several years.

The movement became a political movement, when it began to mount challenges against established political forms. It linked the domestic colonialism of the ghetto with the foreign colonialism in Southeast Asia, moved from the rural, Bible belt South where opposition was open and public into the urban North and the suburbs. Suddenly, the movement began to fall into dissarray. The tactics that worked in Selma, Alabama would not work in Cicero, Illinois. A nation that hated Jim Clark and Bull Connor sympathized with Mayor Daley. The two forces present in the Black community since slavery - assimilationists and integrationism on one hand and separatism on the other - began to vie with each other openly, setting the stage for confusion, for public disagreements between black spokesmen, and for a general lack of direction among the masses. 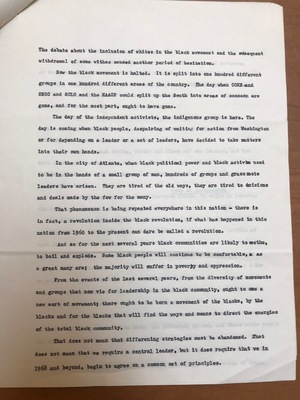 The debate about the inclusion of whites in the black movement and the susequent withdrawal of some whites caused another period of hesitation.

The day of the independent activists, the indigenous group is here. The day has come when black people, in despair for action from Washington or for depending on a leader or a set of leaders, have decided to take matters into their own hands.

In the city of Atlanta, when Black political power and Black activism were in the hands of a small group of men, hundreds of groups and grassroots leaders rose. They were tired of the old ways, tired of decisions and deals made by the few for the many.

And so for the next several years Black communities are likely to seethe, boil and explode. Some Black people will continue to be uncomfortable, as a great many are; the majority will suffer in poverty and oppression. 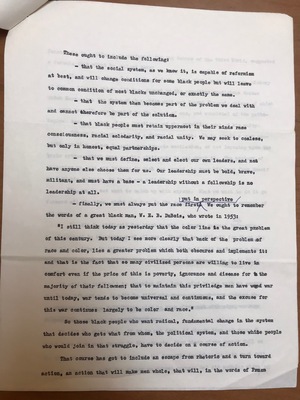 These ought to include the following:

-that the social system, as we know it, is capable of reformism at best, and will change conditions for some black people but will leave to common condition of most blacks unchanged, or exactly the same.

-that the system then becomes part of the problem we deal with and cannot therefore be part of the solution.

-that Black people must retain uppermost in their minds race consciousness, racial solidarity, and racial unity. We may seek to colloborate in honest, equal partnerships.

-that we must define, select and elect our own leaders, and not have anyone else choose them for us. Our leadership must be bold, brave, militant, and must have a base - a leadership without a followship is no leadership at all.

-finally, we must always put the race first in perspective. We ought to remember the words of a great black man, W.E. B. Dubois, who wrote in 1953:

"I still think today as yesterday that the color line is the great problem of this century. But today I see more clearly that back of the problem of race and color, lies a greater problem which both obscures and implements it: and that is the fact that so many civilized persons are willing to live in comfort even if the price of this is poverty, ignorance and disease for the majority of their fellowmen; that to maintain this priviledge men have waged war until today, war tends to become universal and continuous, and the excuse for this war continues largely to be color and race."

So those black people who want radical, fundamental change in the system that decides who gets what from whom, the political system, and those white people who would join that struggle, have to decide on a course of action.

That course has got to include an escape from rhetoric and a turn toward action, an action that will make men whole, that will, in the words of Frnzn 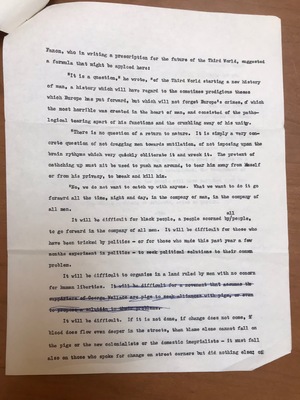 Fanon, who in writing a prescription for the future of the Third World, suggested a formula that might be applied here:

"It is a question," he wrote, "of the Third World starting a new history of man, a history which will have regard to the sometimes prodigious theses which Europe has put forward, but which will not forget Europe's crimes, of which the most horrible was created in the heart of man, and consisted of the patho-logial tearing apart of his functions and the crumbling way of his unity.

"There is no question of a return to nature. It is simply a very concrete question of not dragging men towards mutiliation, of not imposing upon the brain rhythms which very quickly obliterate it and wreck it. The pretext of catching up must not be used to push man around, to tear him away from himself or his privacy, to break and kill him.

It will be difficult to organize in a land ruled by men with no concern for human liberties.

It will be difficult. If it is not done, if change does not come, if blood doesn't flow even deeper in the streets, then blame alone cannot fall on the pigs or the new colonialists or the domestic imperialists - it must fall also on those who spoke for change on street corners but did nothing else;