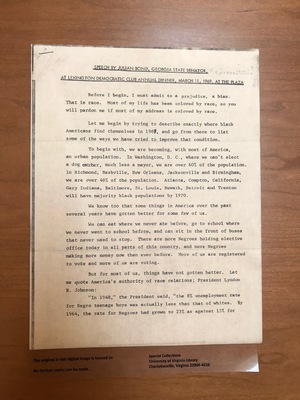 AT LEXINGTON DEMOCRATIC CLUB ANNUAL DINNER, MARCH 11, 1969, AT THE PLAZA

Before I begin, I must admit to a prejudice, a bias. That is race. Most of my life has been colored by race, so you will pardon me if most of my address is colored by race.

Let me begin by trying to describe exactly where black Americans find themselves in 1969, and go from there to list some of the ways we have tried to improve that condition.

We know too that some things in America over the past several years have gotten better for some few of us.

But for most of us, things have not gotten better. Let me quote America's authority of race relations; President Lyndon B. Johnshon: 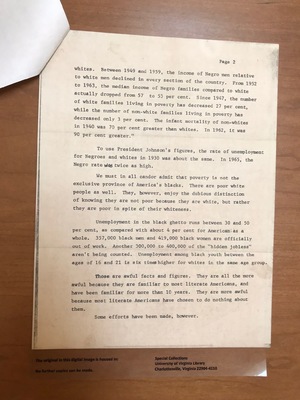 whites. Between 1949 and 1959, the income of Negro men relative to white men declined in every section of the country. From 1952 to 1963, the median income of Negro families compared to white actually dropped from 57 to 53 per cent. Since 1947, the number of white families living in poverty had decreased 27 per cent, while the number of non- white families living in poverty had decreased only 3 per cent. The infant mortality of non-whites in 1940 was 70 per cent grater than whites. In 1962, it was 90 per cent greater. "

To use President Johnson's figures, the rate of unemployment for Negroes and whites in 1930 was about the same. In 1965, the Negro rate was twice as high.

We must in all candor admit that poverty is not the exclusive province of America's blacks. There are poor white people as well. They, however, enjoy the dubious distinction of knowing they are not poor because they are white, but rather they are poor in spite of their whiteness.

Unemployment in the black ghetto runs between 30 and 50 per cent, as compared with about 4 per cent for Americans as a whole. 357,000 black men and 419,000 black women are officially out of work. Another 300,000 to 400,000 of the "hidden jobless" aren't being counted. Unemployment among black youth between the ages of 16 and 21 is six times higher for whites in the same age group.

Some efforts have been made, however. 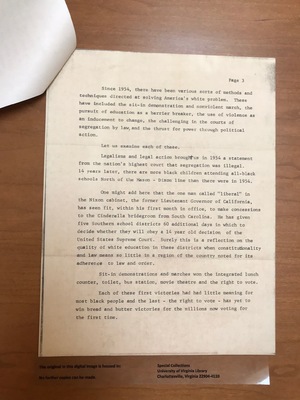 Since 1954, there have been various sorts of methods and techniques directed at solving America's white probem. These have included the sit- in demonstration and nonviolent march, the pursuit of education as a barrier breaker, the use of violence as an inducement to change, the challenging in the courts of segregation by law, and the thrust for power through political action.

Let us examine each of these.

Legalism and legal action brought us in 1954 a statement from the nation's highest court that segregation was illegal. 14 years later, there are more black children attending all-black schools North of the Mason - Dixen line than there were in 1954.

One might add here that the one man called "liberal" in the Nixon cabinet, the former Lieutenant Governor of California, has seen fit, within his first month in office, to make concessions to the Cinderella bridegroom from South Carolina. He has given five Southern school districts 60 additional days in which to decide whether they will obey a 14 year old decision of the United States Supreme Court. Surely this is a reflection on the quality of white education in these districts when constitutionality and law means so little in a region of the country noted for its adherence to law and order.

Each of these first victories had had little meaning for most black people and the last - the right to vote - has yet to win bread and butter victories for the millions now voting for the first time. 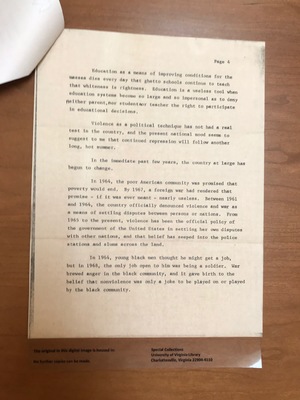 Education as a means of improving conditions for the masses dies every day that ghetto schools continue to teach that whiteness is rightness. Education is a useless tool when education systems become to large and so impersonal as to deny neither parent, nor student nor teacher the right to participate in educational decisions.

Violence as a political technique has not had a real test in the country, and the present national mood seems to suggest to me that continued repression will follow another long, hot summer.

In the immediate past few years, the country at large has begun to change.

In 1964, the poor American community was promised that poverty would end. BY 1967, a foreign war had rendered that promise - if it was ever meant - nearly useless. Between 1961 and 1964, the country officially denounced violence and war as a means of settling disputes between persons and nations. From 1965 to the present, violence has been the official policy of the government of the United States in settling her own disputes with other nations, and that belief has seeped into the police stations and slums across the land.

In 1964, young black men thought he might get a job, but in 1968, the only job open to him was being a soldier. Was brewed anger in the black community, and it gave birth to the belief that nonviolence was only a joke to be played on or played by the black community. 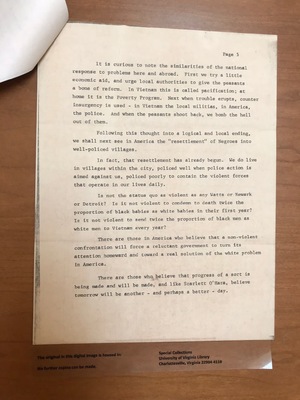 It is curious to note the similarities of the national response to problems here and abroad. First we try a little economic aid, and urge local authorities to give the peasants a bone of reform. In Vietnam this is called pacification; at home it is the Poverty Program. Next when trouble erupts, counter insurgency is used - in Vietnam the local militias, in America, the police. And when the peasants shoot back, we bomb the hell out of them.

Following this thought into a logical and local ending, we shall next see in America the "resettlement" of Negroes into well-policed villages.

In fact, the resettlement has already begun. We do live in villages within the city, policed well when police action is aimed against us, policed poorly to conatin the violence forces that operate in our lives daily.

There are those in America who believe that a non-violent confrontation will force a reluctant government to turn its attention homeward and toward a real solution of the white problem in America.

There are those who believe that progress of a sort is being made and will be made, and like Scarlett O'Hara, believe tomorrow will be another - and perhaps a better - day.