(Online Participant) Speech on the crisis in race on college campuses, 8 October 1969 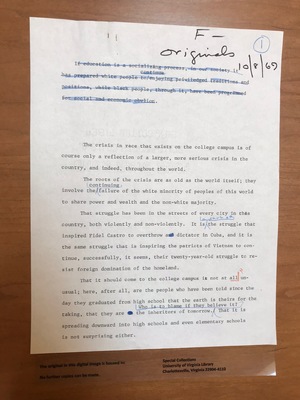 The crisis in race that exists on the college campus is of course only a reflection of a larger, more serious crisis in the country, and indeed throughout the world.

The roots of the crisis are as old as the world itself; they involve the continuing failure of the white minority of peoples of this world to share power and wealth and the non-white majority.

That struggle has been in the streets of every city in this country, both violently and non-violently. It is a part of the struggle that inspired Fidel Castro to overthrow a dictator in Cuba, and it is the same struggle that is inspiring the patriots of Vietnam to continue, successfully, it seems, their twenty-year-old struggle to resist foreign domination of the homeland.

That it should come to the college campus is not at all2 unusual; here, after all, are the people who have been told since the day they graduated from high school that the earth is theirs for the taking, that they are the inheritors of tomorrow. Who is to blame if they believe it? That it is spreading downward into high schools and even elementary schools is not surprising either. 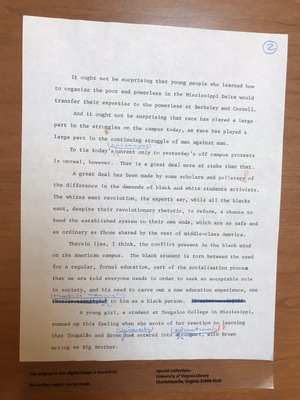 It ought not be surprising that young people who learned how to organize the poor and powerless in the Mississippi Delta would transfer their expertise to the powerless at Berkeley and Cornell.

To tie today's on-campus unrest only to yesterday's off-campus protests is unreal, however. Ther is a great deal more at stake than that.

A great deal has been made by some scholars and pollsters 3 of the difference in the demands of black and white students activists. The whites want revolution, the experts say, while all the blacks want, despite their revolutionary rhetoric, is reform, a chance to bend the established system to their own ends, which are as safe and as ordinary as those shared by the rest of middle-class America.

Therein lies, I think, the conflict present in the black mind on the American campus. The black student is torn between the need for a regular, formal eductaion, part of the socialization process that we are told everyone needs in order to seek an acceptable role in society, and his need to carve out a new education experience, one that is meaningful to him as a black person.

A young girl, a student at Tougaloo College in Mississippi, summed up this feeling when she wrote of her reaction to learning that Tougaloo and Brown University had entered into a educational 4 compact, with Brown acting as Big Brother. 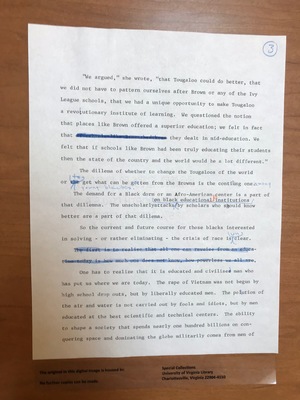 "We argued," she wrote, "that Tougaloo could do better, that we did not have to pattern ourselves after Brown or any of the Ivy League schools, that we had a unique opportunity to make Tougaloo a revolutionary institute of learning. We questioned the notion that places like Brown offered a superior education; we felt in fact that they dealt in mid-education. We felt that if schools like Brown had been truly educating their students then the state of the country and the world would be a lot different."

The dillema of whether to change the Tougaloos of the world or to get what can be gotten from the Browns is the continung one among young blacks.

So the current and future course for those blacks interested in solving - or rather eliminating - the crisis of race is unclear.

One has to realize that it is educated and civilised man who has put us where we are today. The rape of Vietnam was not begun by high school drop outs, but by liberally educated men. The pollution of the air and water is not carried out by fools and idiots, but by men educated at the best scientific and technical centers. The ability to shape a society that spends nearly one hundred billions on conquering space and dominating the globe militarily comes from men of 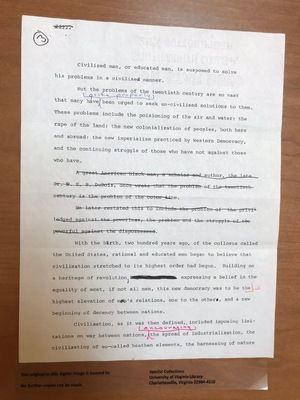 Civilised man, or educated man, is susposed to solve his problems in a civilised manner.

But the problems of the twentieth century are so vast that many have quite properly been urged to seek un-civilised solutions to them. These problems include the poisioning of the air and water; the rape of the land; the new colonialization of peoples, both here and abroad; the new imperialism practiced by Western Demorcacy, and the continuing struggle of those who have not against those who have.

With the birth, two hundred years ago, of the collosus called the United States, rational and educated men began to believe that civilisation stretched to its highest order had begun. Building on a heritage of revolution, expressing a belief in the equality of most, if not all men, this new democracy was to be the 7 highest elevation of man's relations, one to the other, and a new beginning of decency between nations.

Civilization, as it was then defined, included imposing limitations on war between nations, encouraging the spread of industrialization, the civilizating of so-called heathen elements, the harnessing of nature 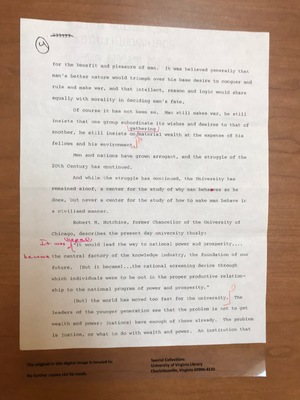 for the benefit and pleasure of man. It was believed generally that man's better nature would triumph over his base desire to conquer and rule and make war, and that intellect, reason and logic would share equally with morality in deciding man's fate.

Of course it has not been so. Man still makes war, he still insists that one group subordinate its wishes and desires to that of another, he still insists on gathering material wealth at the expense of his fellows and his environment.

Men and nations have grown arrogant, and the struggle of the 20th Century has continued.