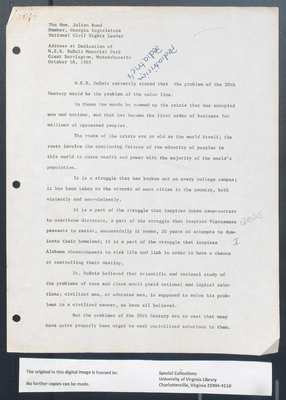 In those few words he summed up the crisis that has occupied men and nations, and that has become the first order of business for millions of oppressed peoples.

The roots of the crisis are as old as the world itself; the roots involve the continuing failure of the minority of peoples in this world to share wealth and power with the majority of the world's population.

It is a struggle that has broken out on every college campus; it has been taken to the streets of most cities in the country, both violently and non-violently.

Dr. DuBois believed that scientific and rational study of the problems of race and class would yield rational and logical solutions; civilized man, or educated man, is supposed to solve his problems in a civilized manner, we have all believed.

But the problems of the 20th Century are so vast that many have quite properly been urged to seek uncivilized solutions to them. 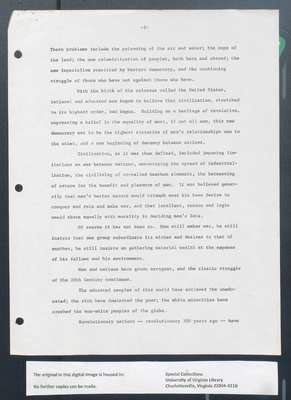 These problems include the poisoning of the air and water; the rape of the land; the new colonialization of people, both here and abroad; the new imperialism practiced by Western democracy, and the continuing struggle of those who have not against those who have.

With the birth of the colossus called the United States, rational and educated men began to believe that civilization, stretched to its highest order, had begun. Building on a heritage of revolution, expressing a belief in the equality of most, if not all men, this new democracy was to be the highest elevation of men's relationships one to the other, and a new beginning of decency between nations.

Civilization, as it was then defined, included imposing limitations on war between nations, encouraging the spread of industrialization, the civilizing of so-called heathen elements, the harnessing of nature for the benefit and pleasure of man. It was believed generally that man's better nature would triumph over his base desire to conquer and rule and make war, and that intellect, reason and logic would share equally with morality in deciding man's fate.

Of course it has not been so. Man still makes war, he still insists that one group subordinate its wishes and desires to that of another, he still insists on gathering material wealth at the expense of his fellows and his environment.

Men and nations have grown arrogant, and the classic struggle of the 20th Century continues.

The educated peoples of this world have enslaved the uneducated; the rich have dominated the poor; the white minorities have crushed the non-white peoples of the globe. 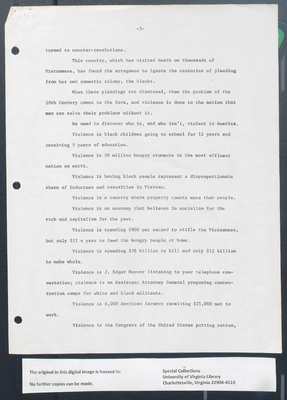 This country, which has visited death on thousands of Vietnamese, has found the arrogance to ignore the centuries of pleading from her own domestic colony, the blacks.

When these pleadings are dismissed, then the problem of the 20th Century comes to the fore, and violence is done to the notion that men can solve their problems without it.

We need to discover who is, and who isn't, violent in America.

Violence is black children going to school for 12 years and receiving 5 years of education.

Violence is 30 million hungry stomachs in the most affluent nation on earth.

Violence is having black people represent a disproportionate share of inductees and casualties in Vietnam.

Violence is a country where property counts more than people.

Violence is spending $900 per second to stifle the Vietnamese, but only $77 a year to feed the hungry people at home.

Violence is spending $78 billion to kill and only $12 billion to make whole.

Violence is the Congress of the United States putting cotton, 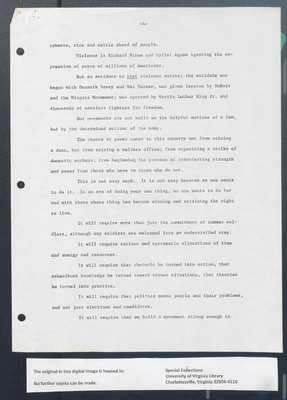 tobacco, rice and cattle ahead of people.

Violence is Richard Nixon and Spiral Agnew ignoring the expression of peace of millions of Americans.

But an antidote to that violence exists; the antidote was begun. with Denmark Vesey and Nat Turner, was given impetus by DuBois and the Niagara Movement; was spurred by Martin Luther King Jr. and thousands of nameless fighters for freedom.

But movement are not built on the helpfulmotions of a few, but by the determined actions of the many.

The chance at power comes in this country not from seizing a dean, but from seizing a welfare office; from organizing a strike of domestic workers; from beginning the process of transferring strength and power from those who have to those who do not.

It will require more than just the commitment of summer soldiers, although any solders are welcomed into an understaffed army.

It will require serious and systematic allocations of time and energy and resources.

It will require that politics means people and their problems, and not just elections and candidates.

It will require that we build a movement strong enough to

Last edit about 1 month ago by Carter G. Woodson Institute 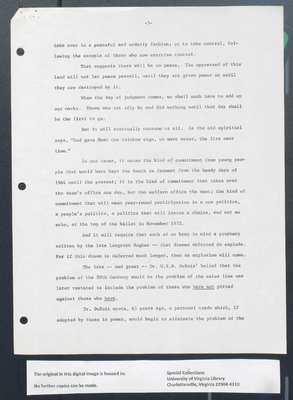 take over in a peaceful and orderly fashion; or to take control, following the example of those who now exercise control.

That suggests there will be no peace. The oppressed of this land will not let peace prevail, until they are given power or until they are destroyed by it.

When the day of judgment comes, we shall each have to add up our marks. Those who sat idly by and did nothing until that day shall be the first to go.

But it will eventually consume us all. As the old spiritual says, "God gave Noah the rainbow sign, no more water, the fire next time."

And it will require that each of us keep in mind a prophecy written by the late Langston Hughes -- that dreams deferred do explode. For if this dream is deferred much longer, then an explosion will come.

Dr. DuBois wrote, 65 years ago, a personal credo which, if adopted by those in power, would begin to eliminate the problem of the