(Online Participant) Speech made before the Hungry Club 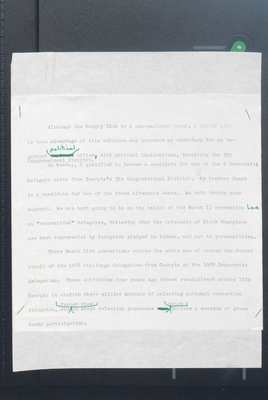 Although the Hungry Club is a non-partisan forum, I should like to take advantage of this audience and announce my candidacy for an important political office , with national implications, involving the 5th Congressional District.

On Monday, I qualitfied to become a candidate for one of the 4 Democratic delegate seats from Georgia's 5th Congressional District. My brother James is a candidate for one of the three alternate seats. We both invite your support. We are both going to be on the ballot at the March 11 convention here as "uncommitted" delegates, believing that the interests of Black Georgians are best represented by delegates pledged to issues, and not to personalities.

These March 11th conventions across the state are of course the direct result of the 1968 challenge delegation from Georgia at the 1968 Democratic Delegation. Those activities four years ago forced recalcitrant states like Georgia to abolish their elitist methods of selecting national convention delegates, and forced them to adopt selection processes which include a maximum of grass roots participation. 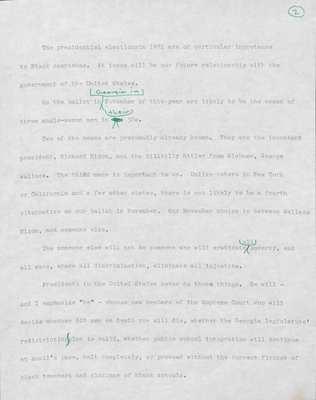 The presidental elections in 1972 are of particular improtance to Black Americans. At issue will be our future relationship with the government of the United States.

On the ballot in Georgia in November of this year are likely to be the names of three anglo-saxon men in their 50s.

Two of the names are presumably already known. They are the incumbent president, Richard Nixon, and the hillbilly hitler from Alabama, George Wallace. The third name is important to us. Unlike voters in New York or California and a few other states, there is not likely to be a fourth slternative on our ballot in November. Our November choice is between Wallace Nixon, and someone else.

The someone else will not be someone who will eradicate all poverty, end all wars, erase all discrimination, eliminate all injustice.

Presidents in the United States never do those things. He will - and I emphasize "he" - choose new members of the Supreme Court who will decide whether 600 men on death row will die, whether the Georgia legislature' redistricting plan is valid, whether public school integration will continue at snail's pace, halt completely, or proceed without the current firings of black teachers and closings of black schools. 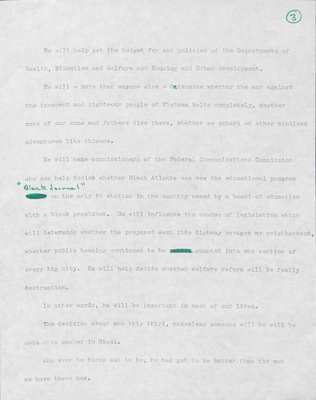 He will help set the budget for and policies of the Departments of Health, Education and Welfare and Housing and Urban Development.

He will - more than anyone else - determine whether the war against the innocent and righteous people of Vietnam halts completely, whether more of our sons and fathers dies there, whether we embark on other mindless adventures like thisone.

He will name commissioners of the Federal Communications Commission who can help decide whether Black Atlanta can see the educational program Black Journal on the tv station in the country owned by a board of education with a black president. He will influence the course of legislation which will determine whether the proposed West Side Highway ravages my neighborhood, whether public housing continues to be shunted into one section of every big city. He will help decide whether welfare reform will be family destruction.

In other words, he will be important in each of our lives.

The decision about who this third, namesless someone will be will be made this summer in Miami.

Who ever turns out to be, he has got to be better than the man we have there now.

Last edit 21 days ago by amyhumphriesuk 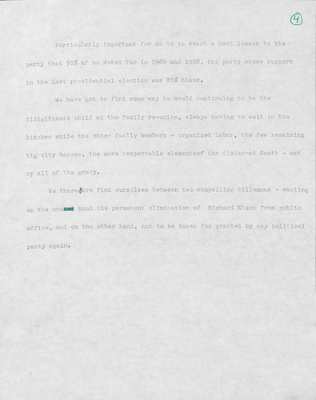 Particularly important for us is to teach a hard lesson to the party that 90% of us voted for in 1964 and 1968, the party whose support in the last presidential election was 20% black.

We have got to find some way to avoid continuing to be the illegitimate child at the family reunion, always having to wait in the kitchen while the other family members - organized labor, the few remaining big city bosses, the more respectable elements of the dixiecrat South - eat up all of the gravy.

We therefore find ourselves between two compelling dillemnas - wanting on the one hand the permanent elimination of Richard Nixon from public office, and on the other hand, not to be taken for granted by any political party again.

Last edit 21 days ago by amyhumphriesuk 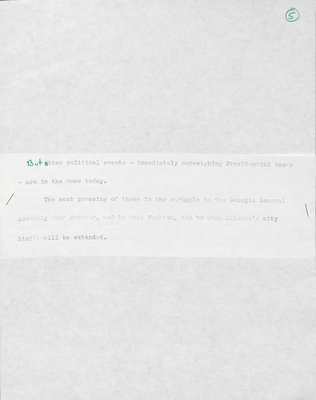 But other political events - immediately outweighing Presidential races - are in the news today.

The most pressing of these is the struggle in the Georgia General Assembly over whether, and in what fashion, and by whom Atlanta's city limits will be extended.