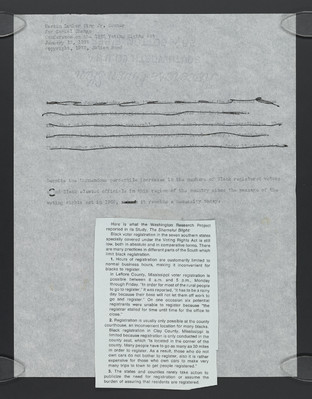 Despite the thrmendous percentile increases in the numbers of Black registered voters and Black elected officials in this region of the country since the passage of the voting rights act in 1965, it remains a necessity today:

Here is what the Washington Research Project reported in its Study, ,The Shameful Blight: Black voter registration in the secen southern states specially covered under the Voting Rights Act is still low, both in absolute and in comparative terms. There are many practices in different parts of the South which limit black registration. 1. Hours of registration are customarily limited to normal business hours, making it inconvenient for blacks to register. In Leflore County, Mississippi voter registration is possible between 8 a.m. and 5 p.m., Monday through Friday. "In order for most of the rural people to go register," it was reported, "it has to be a rainy day because their boss will not let them off work to go and register." On one occasion six potential registrants were unable to register because "the registrar stalled for time until time for the office to close." 2. Registration is usually only possible at the county courthouse, an inconvenient location for many blacks. Black registration in Clay County, Mississippi is limited because registration is only conducted in the county seat, which "is located in the corner of the county. Many people have to go as many as 30 miles in order to register. As a result, those who do not own cars do not bother to register, also itis rather expensive for those who own cars to make very many trips to town to get people registered." 3. The states and counties rarely take action to publicize the need for registration or assume the burden of assuring that residents are registered. 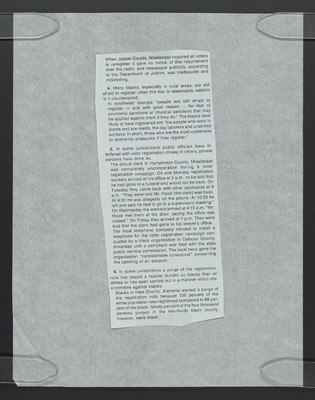 When Jasper County, Mississippi required all voters to reregister it gave no notice of this requirement over the radio, and newspaper publicity, according to the Department of Justice, was inadequate and misleading.

4. Many blacks, especially in rural areas, are still afraid to register; often this fear is reasonable; seldom is it counteracted In southwest Georgia "people are still afraid to register - and with good reason - for fear of economic sanctions or physical sanctions that may be applied against them if they do." The blacks least likely to have registered are "the people who work in plants and are maids, the day laborers and unskilled workers; in short, those who are the most vulnerable to economic pressures if they register."

5. In some jurisdictions public officials have interfered with voter registration drives; in others, private persons have done so. The circuit clerk in Humphreys County, Mississippi was completely uncooporative during a voter registration campaign. On one Monday registration workers arrived at his office at 2 p.m., to be told that he had gone to a funeral and would not be back. On Tuesday they came back with other applicants at 9 a.m. "They were told Mr. Hood (the clerk) was busy. At 9:30 he was allegedly on the phone. At 10:00 he left and said he had to go to a supervisory meeting." On Wednesday the workers arrived at 4:15 p.m. "Mr. Hood met them at the door, saying the office was closed." On Friday they arrived at 1 p.m. They were told that the clerk had gone to his lawyer's office. The local telephone company refused to install a telephone for the voter registration campaign conducted by a black organization in Calhoun County, Arkansas until a complaint was filed with the state public service commission. The local bank gave the organization "considerable runaround" concerning the opening of an account. 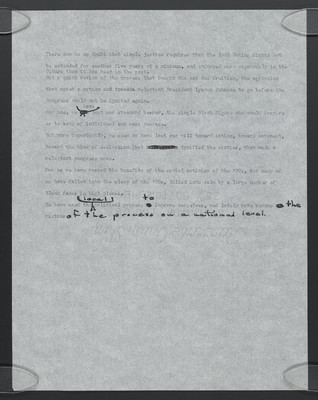 There can be no doubt that simple justice requires that the 1965 Voting Rights Act be extended for another five years at minimum, and enforced more vigorously in the future than it has been in the past. But a quick review of the process that bought the act to fruition, the agitation that upset a nation and forceda reluctant President Lyndon Johnson to go before the Congress could not be ignited again. For one, we have lost our standard bearer, the single Black figure who could inspire acts of individual and mass courage. But more importantly, we seem to have lost our will toward action, toward movement, toward the kind of dedication that typified the sixties, that made a reluctant congress move. For as we have reaped the benefits fo the social activism of the '60s, too many of us have fallen into the sleep fo the '70s, lulled into calm by a large number of Black faces in high places. We have used the local political process to improve ourselves, and lately have become the victims of the process on a national level. 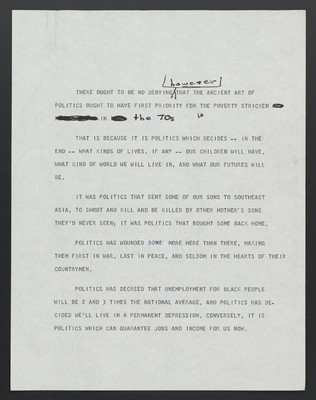 THAT IS BECAUSE IT IS POLITICS WHICH DECIDES -- IN THE END -- WHAT KINDS OF LIVES, IF ANY -- OUR CHILDREN WILL HAVE, WHAT KIND OF WORLD WE WILL LIVE IN, AND WHAT OUR FUTURES WILL BE.

POLITICS HAS WOUNDED SOME MORE HERE THAN THERE, MAKING THEM FIRST IN WAR, LAST IN PEACE, AND SELDOM IN THE HEARTS OF THEIR COUNTRYMEN.

POLITICS HAS DECREED THAT UNEMPLOYMENT FOR BLACK PEOPLE WILL BE 2 AND 3 TIMES THE NATIONAL AVERAGE, AND POLITICS HAS DECIDED WE'LL LIVE IN A PERMANENT DEPRESSION, CONVERSELY, IT IS POLITICS WHICH CAN GUARANTEE JOBS AND INCOME FOR US NOW. 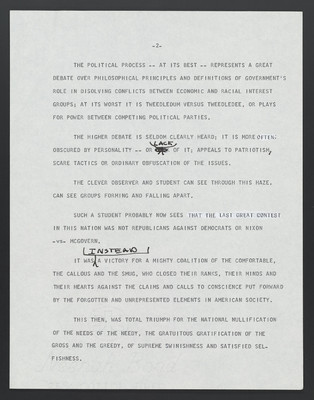 -2THE POLITICAL PROCESS -- AT ITS BEST -- REPRESENTS A GREAT DEBATE OVER PHILOSOPHICAL PRINCIPLES AND DEFINITIONS OF GOVERNMENT'S ROLE IN DISOLVING CONFLICTS BETWEEN ECONOMIC AND RACIAL INTEREST GROUPS; AT ITS WORST IT IS TWEEDLEDUM VERSUS TWEEDLEDEE, OR PLAYS FOR POWER BETWEEN COMPETING POLITICAL PARTIES.

THE HIGHER DEBATE IS SELDOM CLEARLY HEARD; IT IS MORE OFTEN OBSCURED BY PERSONALITY -- OR LACK OF IT; APPEALS TO PATRIOTISM, SCARE TACTICS OR ORDINARY OBFUSCATION OF THE ISSUES.

THE CLEVER OBSERVER AND STUDENT CAN SEE THROUGH THIS HAZE, CAN SEE GROUPS FORMING AND FALLING APART.

SUCH A STUDENT PROBABLY NOW SEES THAT THE LAST GREAT CONTEST IN THIS NATION WAS NOT REPUBLICANS AGAINST DEMOCRATS OR NIXON - vs - MCGOVERN.

IT WAS INSTEAD A VICTORY FOR A MIGHTY COALITION OF THE COMFORTABLE, THE CALLOUS AND THE SMUG, WHO CLOSED THEIR RANKS, THEIR MINDS, AND THEIR HEARTS AGAINST THE CLAIMS AND CALLS TO CONSCIENCE PUT FORWARD BY THE FORGOTTEN AND UNREPRESENTED ELEMENTS IN AMERICAN SOCIETY.

THIS THEN, WAS TOTAL TRIUMPH FOR THE NATIONAL NULLIFICATION THE NEEDS OF THE NEEDY, THE GRATUITOUS GRATIFICATION OF THE GROSS AND THE GREEDY, OF SUPREME SWINISHNESS AND SATISFIED FISHNESS.