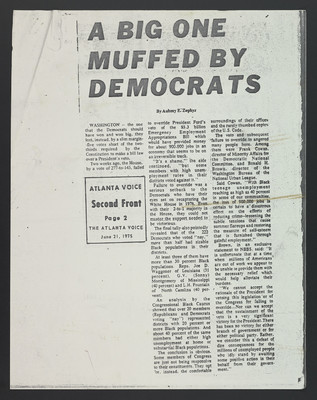 A Big One Muffed by Democrats By Aubrey E. Zephyr

Washington -- the one that the Democrats should have won big, they lost, instead, by a slim margin-five votes short of the two-thirds required by the Constitution to make a bill law over a President's veto.

Two weeks ago, the House, by a vote of 277-to-145, failed to override President Ford's veto of the $5.3 billion Emergency Employment Appropriations Bill which would have provided money for about 900,000 jobs in an economy that seems to be on an irreversible track.

"It's a shame," the aide continued, "but some members with high unemployment rates in their districts voted against it."

Failure to override was a serious setback to the Democrats who have their eyes set on recapturing the White House in 1976. Even with their 2-to-1 majority in the House, they could not muster the support needed to be victorious.

The final tally also pointedly revealed that of the 22 Democrats who voted "nay," more than half had sizable Black populations in their districts.

An analysis by the Congressional Black Caucus showed that over 20 members (Republicans and Democrats voting "nay") represented districts with 20 percent or more Black populations. And about 40 percent of the same members had either high unemployment at home or substantial Black populations.

The conclusion is obvious. Some members of Congress are just not being responsive to their constituents. They opt for, instead, the comfortable surroundings of their offices and the rarely thumbed copies of the U.S. Code.

The veto and subsequent failure to override to angered many people here. Among them were Frank Cowan, director of Minority Affairs for the Democratic National Committes, and Ronald H. Brown, director of the Washington Bureau of the National Urban League.

Said Cowan, "With Black teenage unemployment reaching as high as 40 percent in some of our communities, the loss of 900,000 jobs is certain to have a disastrous effect on the efforts of reducing crime--lessening the subtle tensions that cause summer flareups and restoring the measure of self-esteem that is furnished through. gainful employment."

Brown, in an exclusive statement to NBBS said: "It is unfortunate that at a time when millions of Americans are out of work we appear to be unable to provide them with the necessary relief which would help alleviate their burdens."

"We cannot accept the rationale of the President for vetoing this legislation or of the Congress for failing to override...Nor can we accept that the sustainment of the veto is a very significant victory for the President. There has been no victory for either branch of government or for either political party. Rather, we consider this a defeat of dire consequences for the millions of unemployed people who idly stand by awaiting some positive action in their behalf from their government."