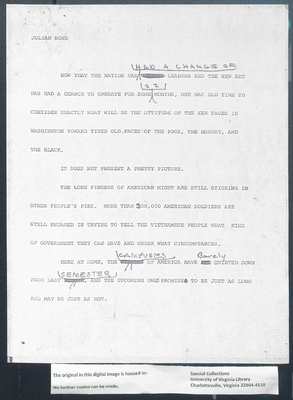 Now that the nation has had a change of leaders and the new set has had a chance to operate for some 22 months, one has had time to consider exactly what will be the attitude of hte new faces in Washington toward tired old faces of the poor, the hungry, and the Black.

It does not present a pretty picture.

The long fingers of American might are still sticking in other people's pies. More than 300,000 American soldiers are still engaged in trying to tell the Vietnamese people what kind of government they can have and under what circumstances.

Here at home, the campuses of America have barely quieted down from last semester, and the upcoming ones promise to be just as long and may be just as hot. 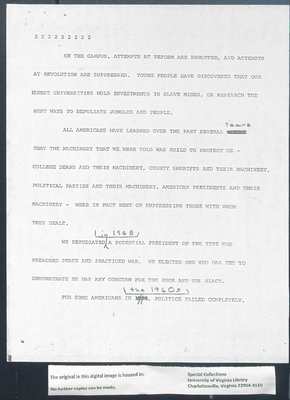 On the campus, atttempts at reform are rebuffed, and attempts at revolution are suppressed. Young people have discovered that our finest universities hold investments in slave mines, or research the best ways to depoliate jungles and people.

We repudiated in 1968 a potential president of the type who preached peace and practiced war. We elected on who has yet to demonstrate he has any concern for the poor and the Black.

For some Americans in the 1960s, politics failed completely. 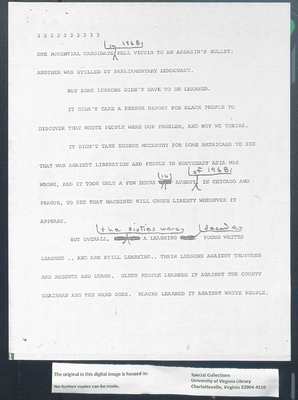 One potential candidate in 1968 fell victim to as assasin's bullet; another was stilled by parliamentary democracy.

But some lessons didn't have to be learned.

It didn't take a Kerner report for black people to discover that white people were our problem, and not we theirs.

It didn't take Eugene McCarthy for some Americans to see taht war against liberation and people in southeast Asia was wrong, and it took only a few hours in August of 1968 in Chicago and Prague, to see that machines will crush liberty wherever it appears. 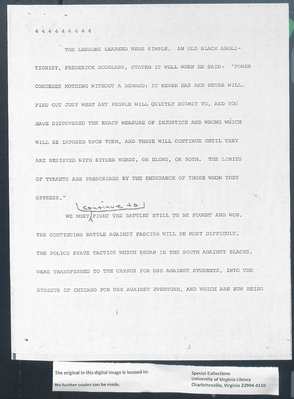 The lessons learned were simple. An old black abolitionist, Frederick Douglass, stated it well when he said: "Power conceds nothing without a demand; it never has and never will. Find out just what any people will quietly submit to, and you have discovered the exact measure of injustice and wrong which will be imposed upon them, and these will continue until they are resisted with either words, or blows, or both. The limits of tyrants are prescribed by the endurance of those whom they oppress."

We must continue to fight the battles still to be fought and won. The continuing battle against fascism will be most difficult. The police state tactics which began in the South against Blacks, were transferred to the campus for use against students, into the streets of Chicago for use against everyone, and which are now being 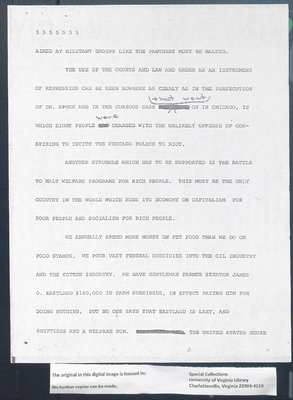 aimed at militant groups like the Panthers must be halted.

The use of the courts and law and order as an instrument of repression can be seen nowhere as clearly as in the persecution of Dr. Spock and in the curious case that went on in Chicago, in which eight people were charged with the unlikely offense of conspiring to incite the Chicago police to riot.

Another struggle which has to be supported is the battle to halt welfare programs for rich people. This must be the only country in the world which runs its economy on capitalism for poor people and socialism for rich people.

We annually spend more money on pet food than we do on food stamps. We pour vast federal subsidies into the oil industry and the cotton industry. We gave gentleman farmer Senator James O. Eastland $140,000 in farm subsidies, in effect paying him for doing nothing. But no one says Eastland is lazy, and shiftless and a welfare bum. The United States House