The important message of 1977 so far is that the sunshine days are over.

For nearly twenty years, a progressive national movement, fueled by the fire from the Southern civil rights struggle and the national anti-war drive armed by legions of youth from college campus and corner pool hall, grew and prospered in the United States.

Today, in the fall of 1977, that movement is in dissaray, its parts divided, its goals unclear, unable to bring itself together to confront the still massive problems of the twentieth century.

The attempt to build a society whose aim would be the democratic satisfaction of the needs of its people has faltered and nearly failed. The hopes and dreams of generations of Americans that each succeeding year would be the year in which the home of the slave finally became the land of the free have been set aside in the name of balanced budgets and corporate domination of the economy.

The process of the deterioration of the movement began in 1968, when that movement was at its greatest height.

It had passed two successive civil rights bills, guaranteed Black Americans the right to public accomodations and the precious right to vote. Its lobbies and marches had convinced 50% of the American population that the war in Vietnam was wrong, and ought to be abandoned. It had nearly won important reforms in the world's oldest political party, the party that despite its worst excesses, still claimed the allegiance of the American underclass. It had aided - often unwillingly - the rebirth of the movement for equality for women. It had seen concern grow for the quality of our air and water It had set college 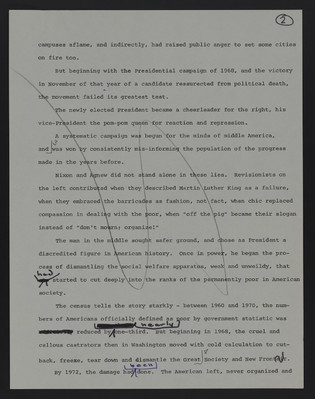 campuses aflame, and indirectly, had raised public anger to set some cities on fire too.

But beginning with the Presidential campaign of 1968, and the victory in November of that year of a candidate ressurected from political death, the movement failed its greatest test.

The newly elected President became a cheerleader for the right, his vice-president the pom-pom queen for reaction and repression.

A systematic campaign was begun for the minds of middle America, and was won by consistently mis-informing the population of the progress made in the years before.

Nixon and Agnew did not stand alone in these lies. Revisionists on the left contributed when they described Martin Luther King as a failure, when they embraced the barricade as fashion, not fact, when chic replaced compassion in dealing with the poor, when "off the pig" became their slogan instead of "don't mourn; organize!"

The man in the middle sought safer ground, and chose as President a discredited figure in American history. Once in power, he began the process of dismantling the social welfare apparatus, weak and unwieldy, that had started to cut deeply into the ranks of the permanently poor in American society.

The census tells the story starkly - between 1960 and 1970, the numbers of Americans officially defined as poor by the government statistic was reduce by nearly one-third. But beginning in 1968, the cruel and callous castrators then in Washington moved with cold calculation to cutback, freeze, tear down and dismantle the Great Society and New Frontier.

By 1972, the damage had been done. The American left, never organized and 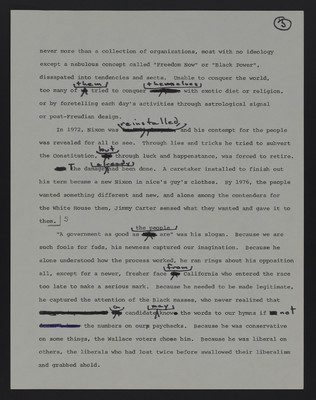 never more than a collection of organizations, most with no ideology except a nebulous conept called "Freedom Now" or "Black Power", dissapated into tendencies and sects. Unable to conquer the world, too many of them trid to conquer themselves with exotic diet or religion, or by foretelling each day's activities through astrological signal or post-Freudian design.

In 1972, Nixon was reinstalled, and his contempt for the people was revealed for all to see. Through lies and tricks he tried to subvert the Constitution, butthrough luck and happenstance, was forced to retire.

The damage already had been done. A caretaker installed to finish out his term bacame a new Nixon in nice's guy's clothes. By 1976, the people wanted something different and new, and alone among the contenders for the White House then, Jimmy Carter sensed what they wanted and gave it to them.

"A government as good as the people are" was his slogan. Because we are such fools for fads, his newness captured our imagination. Because he alone understood how the process worked, he ran rings about his opposition all, except for a newer, fresher face from California who entered the race too late to make a serious mark. Because he needed to be made legitimate, he captured the attention of the Black masses, who never realized that a candidate may know the words to our hymns of not the numbers on our paychecks. Because he was conservative on some things, the Wallace voters chose him. Because he was liberal on others, the liberals who had lost twice before swallowed their liberalism and grabbed ahold. 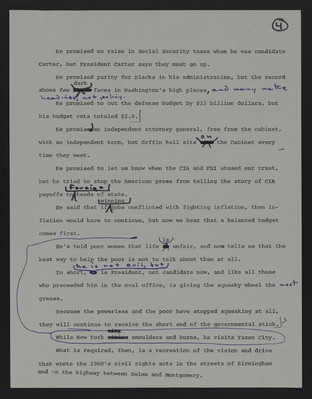 He promised no raise in Social Security taxes when he was candidate Carter, but President Carter says they must go up.

He promised parity for Blacks in his administration, but the record shows few dark faces in Washington's high places, and many make headlines, not policy.

He promised to cut the defense budget by $15 billion dollars, but his budget cuts totaled $2.8.

He promised an independent attorney general, free from the cabinet, with an independent term, but Grffin Bell sits on the Cabinet every time they meet.

He promised to let us know when the CIA and FBI abused our trust, but he tried to stop the American press from telling the story of CIA payoffs to foreign heads of state.

He said that if winning jobs conflicted with fighting inflation, then inflation would have to continue, but now we hear that a balanced budget comes first.

He's told poor women that life is unfair, and now tells us that the best way to help the poor is not to talk about them at all.

In short, he is not evil, but is President, not candidate now, and like all those who preceeded him in the oval office, is giving the squeaky wheel the most grease.

Because the powerless and the poor have stopped squeaking at all, they will continue to receive the short end of the governmental stick.

While New York smoulders and burns, he visits Yazoo City.

What is required, then, is a recreation of the vision and drive that wrote the 1960's civil rights acts in the streets of Birmingham and on the highway between Selma and Montgomery. 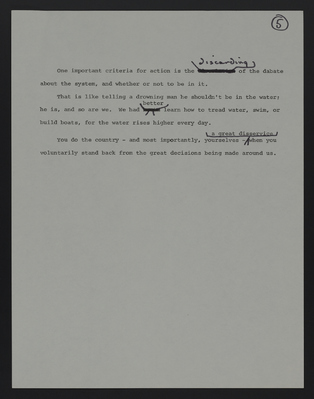 One important criteria for action is the discarding of the debate about the system, and whether or not to be in it.

That is like telling a drowning man he shouldn't be in the water; he is, and so are we. We had better learn how to tread water, swim, or build boats, for the water rises higher every day.

You do the country - and most importantly, yourselves - a great disservice when you voluntarily stand back from the great decisions being made around us.