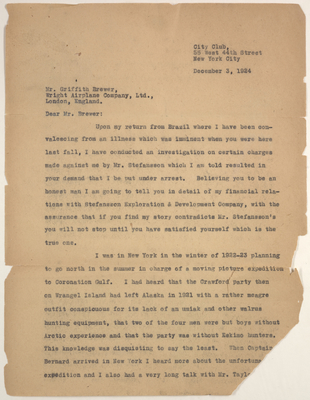 Upon my return from Brazil where I have been convalescing from an illness which was imminent when you were here last fall, I have conducted an investigation on certain charges made against me by Mr. Stefansson which I am told resulted in your demand that I be put under arrest. Believing you to be an honest man I am going to tell you in detail of my financial relations with Stefansson Exploration & Development Company, with the assurance that if you find my story contradicts Mr. Stefansson's you will not stop until you have satisfied yourself which is the true one.

I was in New York in the winter of 1922-23 planning to go north in the summer in charge of a moving picture expedition to Coronation Gulf. I had heard that the Crawford party then on Wrangel Island had left Alaska in 1921 with a rather meagre outfit conspicuous for its lack of an umiak and other walrus hunting equipment, that two of the four men were but boys without Arctic experience and that the party was without Eskimo hunters. This knowledge was disquieting to say the least. When Captain Bernard arrived in New York I heard more about the unfortuna[...] expedition and I also had a very long talk with Mr. Taylo[...] 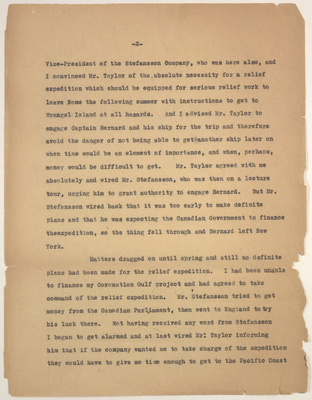 Vice-President of the Stefansson Company, who was here also, and I convinced Mr. Taylor of the absolute necessity for a relief expedition which should be equipped for serious relief work to leave Nome the following summer with instructions to get to Wrangel Island at all hazards. And I advised Mr. Taylor to engage Captain Bernard and his ship for the trip and therefore avoid the danger of not being able to get another ship later on when time would be an element of importance, and when, perhaps, money would be difficult to get. Mr. Taylor agreed with me absolutely and wired Mr. Stefansson, who was then on a lecture tour, urging him to grant authority to engage Bernard. But Mr. Stefansson wired back that it was too early to make definite plans and that he was expecting the Canadian Government to finance theexpedition, so the thing fell through and Bernard left New York.

Matters dragged on until spring and still no definite plans had been made for the relief expedition. I had been unable to finance my Coronation Gulf project and had agreed to take command of the relief expedition. Mr. Stefansson tried to get money from the Canadian Parliament, then went to England to try his luck there. Not having received any word from Stefansson I began to get alarmed and at last wired Mr: Taylor informing him that if the company wanted me to take charge of the expedition they would have to give me time enough to get to the Pacific Coast 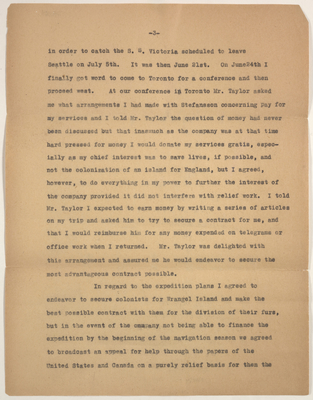 in order to catch the S. S. Victoria scheduled to leave Seattle on . It was then . On I finally got word to come to Toronto for a conference and then proceed west. At our conference in Toronto Mr. Taylor asked me what arrangements I had made with Stefansson concerning pay for my services and I told Mr. Taylor the question of money had never been discussed but that inasmuch as the company was at that time hard pressed for money I would donate my services gratis, especially as my chief interest was to save lives, if possible, and not the colonization of an island for England, but I agreed, however, to do everything in my power to further the interest of the company provided it did not interfere with relief work. I told Mr. Taylor I expected to earn money by writing a series of articles on my trip and asked him to try to secure a contract for me, and that I would reimburse him for any money expended on telegrams or office work when I returned. Mr. Taylor was delighted with this arrangement and assured me he would endeavor to secure the most advantageous contract possible.

In regard to the expedition plans I agreed to endeavor to secure colonists for Wrangel Island and make the best possible contract with them for the division of their furs, but in the event of the company not being able to finance the expedition by the beginning of the navigation season we agreed to broadcast an appeal for help through the papers of the United States and Canada on a purely relief basis for then the 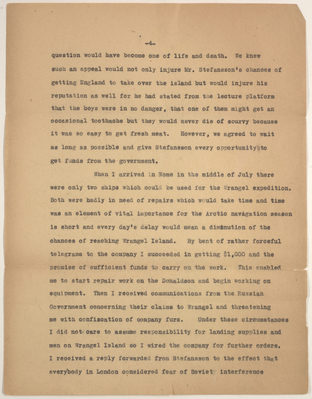 question would have become one of life and death. We knew such an appeal would not only injure Mr. Stefansson’s chances of getting England to take over the island but would injure his reputation as well for he had stated from the lecture platform that the boys were in no danger, that one of them might get an occasional toothache but they would never die of scurvy because it was so easy to get fresh meat. However, we agreed to wait as long as possible and give Stefansson every opportunity to get funds from the government.

When I arrived in Nome in the middle of there were only two ships which could be used for the Wrangel expedition. Both were badly in need of repairs which would take time and time was an element of vital importance for the Arctic navigation season is short and every day’s delay would mean a diminution of the chances of reaching Wrangel Island. By bent of rather forceful telegrams to the company I succeeded in getting $1,000 and the promise of sufficient funds to carry on the work. This enabled me to start repair work on the Donaldson and begin working on equipment. Then I received communications from the Russian Government concerning their claims to Wrangel and threatening me with confiscation of company furs. Under these circumstances I did not care to assume responsibility for landing supplies and men on Wrangel Island so I wired the company for further orders. I received a reply forwarded from Stefansson to the effect that everybody in London considered fear of Soviet interference 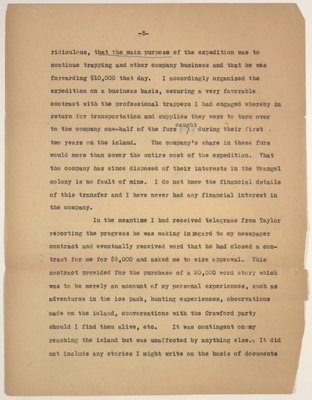 ridiculous, that the main purpose of the expedition was to continue trapping and other company business and that he was forwarding $10,000 that day. I accordingly organized the expedition on a business basis, securing a very favorable contract with the professional trappers I had engaged whereby in return for transportation and supplies they were to turn over to the company one-half of the furs caught/ during their first two years on the island. The company's share in these furs would more than cover the entire cost of the expedition. That the company has since disposed of their interests in the Wrangel colony is no fault of mine. I do not know the financial details of this transfer and I have never had any financial interest in the company.

In the meantime I had received telegrams from Taylor reporting the progress he was making in regard to my newspaper contract and eventually received word that he had closed a contract for me for $3,000 and asked me to wire approval. This contract provided for the purchase of a 20,000 word story which was to be merely an account of my personal experiences, such as adventures in the ice pack, hunting experiences, observations made on the island, conversations with the Crawford party should I find them alive, etc. It was contingent on my reaching the island but was unaffected by anything else. It did not include any stories I might write on the basis of documents