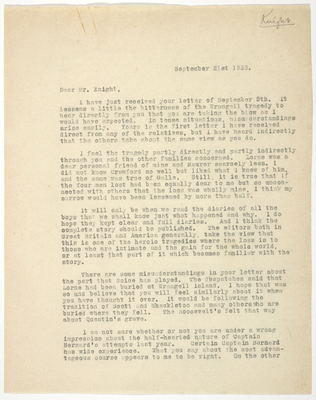 l have just received your letter of September 5th. It lessens a little the bitterness of the Wrangell tragedy to hear directly from you that you are taking the blow as I would have expected. In tense situations, misunderstandings arise easily. Yours is the first letter I have received direct from any of the relatives, but I have heard indirectly that the others take about the same view as you do.

I feel the tragedy partly directly and partly indirectly through you and the other families concerned. Lorne was a dear personal friend of mine and Maurer scarcely less. I did not know Crawford so well but liked what I knew of him, and the same was true of Galle. Still it is true that if the four men lost had been equally dear to me but so unconnected with others that the loss was wholly mine, I think my sorrow would have been lessened by more than half.

It will only be when we read the diaries of all the boys that we shall knkow just what happened and why. I do hope they kept clear and full diaries. And I think the complete story should be published. The editors both in Great Britain and America generally take the view that this is one of the heroic tragedies where the loss is to those who are intimate and the gain for the whole world, or at least that part of it which becomes familiar with the story.

There are some misunderstandings in your letter about the part that Noice has played. The despatches said that Lorne had been buried at Wrangell Island. I hope that was so and believe that you will feel similarly about it when you have thought it over. It would be following the tradition of Scott and Shackleton and many others who are buried where they fell. The Roosevelt's felt that way about Quentin's grave.

I am not sure whether or not you are under a wrong impression about the half-hearted nature of Captain Bernard's attempts last year. Certain Captain Bernard has wide experience. What you say about the most advantageous course appears to me to be right. On the other

Last edit about 1 month ago by August White Guszkowski 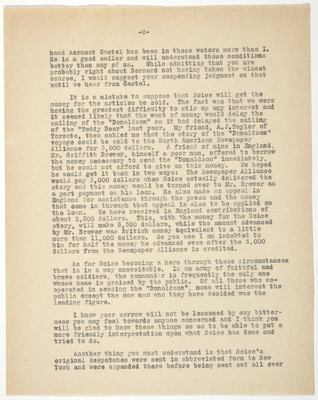 hand Aarnuot Castel has been in those waters more than I. He is a good sailor and will understand those conditions better than any of us. While admitting that you are probably right about Bernard not having taken the wisest course, I would suggest your suspending judgment on that until we hear from Castel.

It is a mistake to suppose that Noice will get the money for the articles he sold. The fact was that we were having the greatest difficulty to stir up any interest and it seemed likely that the want of money would delay the sailing of the "Donaldson" as it had delayed tho sailing of the "Teddy Bear" last year. My friend, A.J.Taylor of Toronto, then cabled me that the story of the "Donaldson" voyage could be sold to the North American newspaper Alliance for 3,000 dollars. A friend of mine in England, Mr. Griffith Brewer, himself a poor man, offered to borrow the money necessary to send the "Donaldson" immediately, but he could not afford to give us this money. We hoped he would get it back in two ways: The Newspaper Alliance would pay 3,000 dollars when Noice actually delivered the story and this money would be turned over to Mr. Brewer as a part payment on his loan. He also made an appeal in England for assistance through the press and the money that came in through that appeal is also to be applied on the loan. We have received in England contributions of about 2,500 dollars. This, with the money for the Noice story, will make 5,500 dollars, while the amount advanced by Mr. Brewer was British money equivalent to a little more than 11,000 dollars. So you see I am indebted to him for half the money he advanced even after the 3,000 dollars from the Newspaper Alliance is credited.

As for Noice becoming a hero through these circumstances that is in a way unavoidable. In an army of faithful and brave soldiers, the commander is frequently the only one whose name is praised by the public. Of all those who cooperated in sending the "Donaldson", none will interest the public except the one man who they have decided was the leading figure.

I know your sorrow will not be lessened by any bitterness you may feel towards anyone concerned and I think you will be glad to know these things so as to be able to put a more friendly interpretation upon what Noice has done and tried to do.

Last edit about 1 month ago by August White Guszkowski 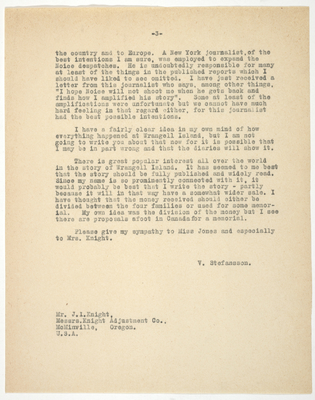 the country and to Europe. A New York journalist,of the best intentions I am sure, was employed to expand the Noice despatches. He is undoubtedly responsible for many at least of the things in the published reports which I should have liked to see omitted. 1 have just received a letter from this journalist who says, among other things, "I hope Noice will not shoot me when he gets back and finds how I amplified his story". Some at least of the amplifications were unfortunate but we cannot have much hard feeling in that regard either, for this journalist had the best possible intentions.

I have a fairly clear idea in my own mind of how everything happened at Wrangell Island, but I am not going to write you about that now for it is possible that I may be in part wrong and that the diaries will show it.

There is great popular interest all over the world in the story of Wrangell Island. It has seemed to me best that the story should be fully published and widely read. Since my name is so prominently connected with it, it would probably be best that I write the story - partly because it will in that way have a somewhat wider sale. I have thought that the money received should either be divided between the four families or used for some memorial. My own idea was the division of the money but I see there are proposals afoot in Canada for a memorial.

Please give my sympathy to Miss Jones and especially to Mrs. Knight.