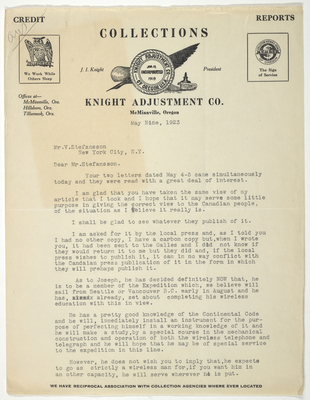 Your two letters dated May 4-5 came simultaneously today and they were read with a great deal of interest.

I am glad that you have taken the same view of my article that I took and I hope that it may serve some little purpose in giving the correct view to the Canadian people, of the situation as I believe it really is.

I shall be glad to see whatever they publish of it.

I am asked for it by the local press and, as I told you I had no other copy, I have a carbon copy but,when I wrote you, it had been sent to the Galles and I did not know if they would return it to me but they did and, if the local press wishes to publish it, it can in no way conflict with the Candaian press publication of it in the form in which they will prehaps publish it.

As to Joseph, he has decided definitely NOW that, he is to be a member of the Expedition which, we believe will sail from Seattle or Vancouver B.C. early in August and he has, alead already, set about completing his wireless education with this in view.

He has a pretty good knowledge of the Continental Code and he will, immediately install an instrument for the purpose of perfecting himself in a working knowledge of it and he will make a study,by a special course in the mechanical construction and operation of both the wireless telephone and telegraph and he will hope that he may be of special service to the expedition in this line.

However, he does not wish you to imply that,he expects to go as strictly a wireless man for,if you want him in an other capacity, he will serve wherever he is put. 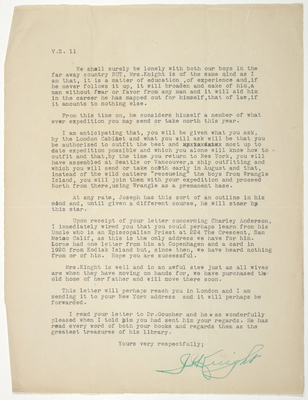 We shall surely be lonely with both our boys in the far away country BUT, Mrs.Knight is of the same mind as I am that, it is a matter of education ,of experience and,if he never follows it up, it will broaden and make of him,a man without fear or favor from any man and it will aid him in the career he has mapped out for himself,that of law,if it amounts to nothing else.

From this time on, he considers himself a member of what ever expedition you may send or take north this year.

I am anticipating that, you will be given what you ask, by the London Cabinet and what you will ask will be that you be authorized to outfit the best and up to date most up to date expedition possible and which you alone will know how to outfit and that,by the time you return to New York, you will have assembled at Seattle or Vancouver,a ship outfitting and which you will send or take north early in August and that, instead of the wild catters "rescueing" the boys from Wrangle Island, you will join them with your expedition and proceed North from there,using Wrangle as a premanent base.

At any rate, Joseph has this sort of an outline in his mind and, until given a different course, he will steer by this star.

Upon receipt of your letter concerning Charley Anderson, I immediately wired you that you could perhaps learn from his Uncle who is an Episcopalian Priest at 224 The Crescent, San Metao Calif, as this is the only address we have for him. Lorne had one letter from him at Copenhagen and a card in 1920 from Kodiak Island but, since then, we have heard nothing from or of him. Hope you are successful.

Mrs.Kinght is well and in an awful stew just as all wives are when they have moving on hands for, we have purchased the old home of her f ather and will move there soon.

This letter will perhaps reach you in London and I am sending it to your New York address and it will perhaps be forwarded.

I read your letter to Dr.Goucher and he was wonderfully pleased when I told him you had sent him your regards. He has read every word of both your books and regards them as the greatest treasures of his library.