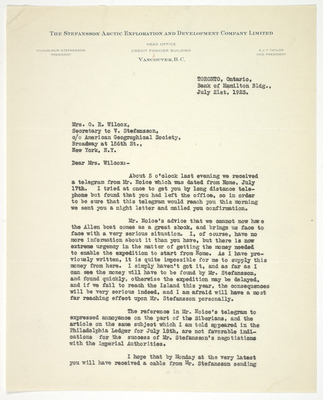 About 5 o‘clock last evening we received a telegram from Mr. Noice which was dated from Nome, July 17th. I tried at once to get you by long distance telephone but found that you had left the office, so in order to be sure that this telegram would reach you this morning we sent you a night letter and mailed you confirmation.

Mr. Noice’s advice that we cannot now have the Allen boat comes as a great shook, and brings us face to face with a very serious situation. I, of course, have no more information about it than you have, but there is now extreme urgency in the matter of getting the money needed to enable the expedition to start from Nome. As I have previously written, it is quite impossible for me to supply this money from here. I simply haven’t got it, and as far as I can see the money will have to be found by Mr. Stefansson, and found quickly, otherwise the expedition may be delayed, and if we fail to reach the Island this year, the consequences will be very serious indeed, and I am afraid will have a most far reaching effect upon Mr. Stefansson personally.

The reference in Mr. Noice’s telegram to expressed annoyance on the part of the Siberians, and the article on the same subject which I am told appeared in the Philadelphia Ledger for July 18th, are not favorable indications for the success of Mr. Stefansson’s negotiations with the Imperial Authorities.

I hope that by Monday at the very latest you will have received a cable from Mr. Stefansson sending

Last edit about 1 month ago by bridgettbonar 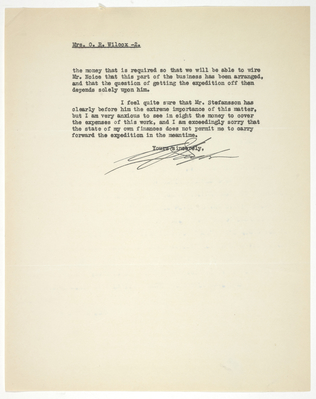 the money that is required so that we will he able to wire Mr. Noice that this part of the business has been arranged, and that the question of getting the expedition off then depends solely upon him.

I feel quite sure that Mr. Stefansson has clearly before him the extreme importance of this matter, but I am very anxious to see in eight the money to cover the expenses of this work, and I am exceedingly sorry that the state of my own finances does not permit me to carry forward the expedition in the meantime.