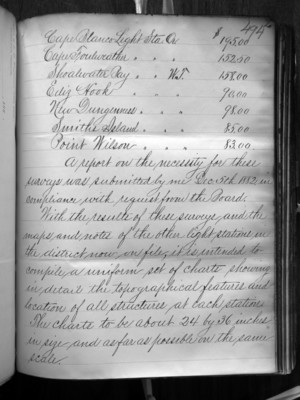 A report on the necessity for these surveys was submitted by me Dec. 5th 1882 in compliance with request from the Board.

With the results of these surveys and the maps and notes of the other light stations in the district now on file, it is intended to compile a uniform set of charts showing in detail the topographical features and location of all structures at each station. The charts to be about 24 by 36 inches in size and as far as possible on the same scale. 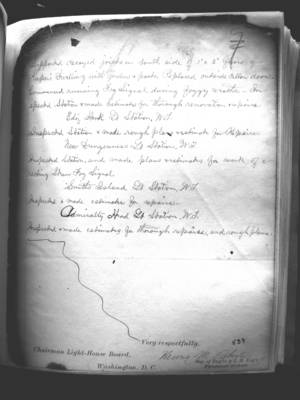 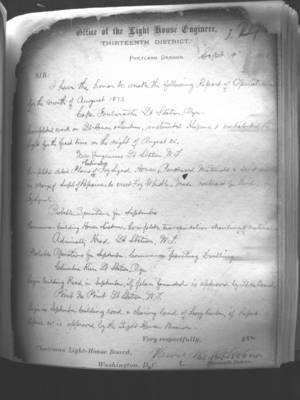 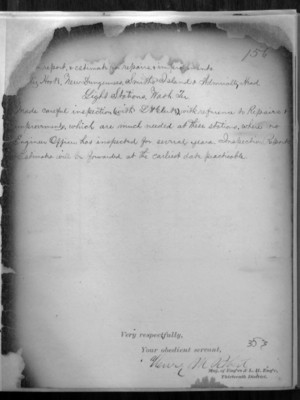 (burned page corner) report, & estimate for repairs & improvements. Cadiz Hook, New Dungenness, Smith’s Island, & Admiralty Head Light Stations, Wash, Ter. Made careful inspection (with LH Clerk) with reference to Repairs & improvements, which are much needed at these stations, where no Engineer Officer has inspected for several years. Inspection Reports, Estimates will be forwarded at the earliest date practicable.

Last edit over 2 years ago by lkarnatz 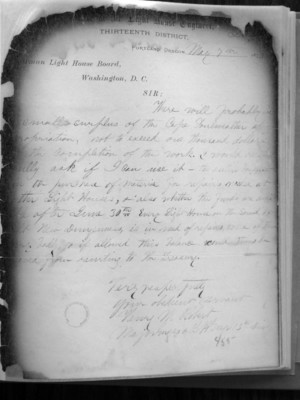 Sir: There will probably be a small surplus of the Cape Foulweather appropriation, not to exceed one thousand dollars. ??? the completion of the work. I would respectfully ask if I can use it - the entire balance - in the purchase of material for repairs made at other Light Houses, & also whether the funds are available after June 30th. Every Light House on the Sound except New Dungenness, is in need of repairs, some of them very badly, & if allowed this balance could thus be saved from reverting to the Treasury.

Show pages that mention New Dungenness in all works