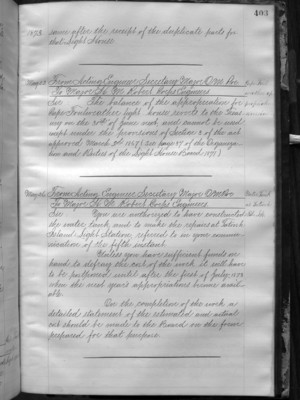 same after the receipt of the duplicate parts for that Light House.

Sir: The balance of the appropriation for Cape Foulweather light-house reverts to the Treasury on the 30th of June next, and cannot be used except under the provisions of Section 3 of the act approved March 2nd 1867 (See page 37 of the Organization and Duties of the Light House Board 1871)

Sir: You are authorized to have constructed the water tank and to make the repairs at Tatoosh Island Light Station, referred to in your communication of the fifth instant.

Unless you have sufficient funds on hand to defray the cost of the work it will have to be postponed until after the first of July, 1873 when the next year's appropriations become available.

On the completion of the work a detailed statement of the estimated and actual cost should be made to the Boards on the form prepared for that purpose. 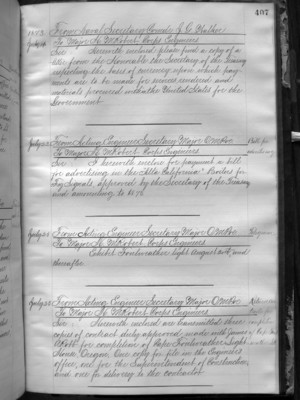 Sir: Herewith enclosed please find a copy of a letter from the Honorable the Secretary of the Treasury respecting the basis of currency upon which payments are to be made for services rendered and materials procured withinthe United States for the Government.

Sir: I herewith enclose for payment a bill for advertising in the "Alta California" Boilers for Fog Signals, approved by the Secretary of the Treasury and amounting to $8.75.

Sir: Herewith enclosed are transmitted three copies of contract duly approved made with James A. Robb for completion of Cape Foulweather Light-House, Oregon. One copy for file in the Engineer's office, one for the Superintendent of Construction, and one for delivery to the contractor.

Last edit about 3 years ago by Wjhoward
All 2 records

Show pages that mention O. M. Poe in all works