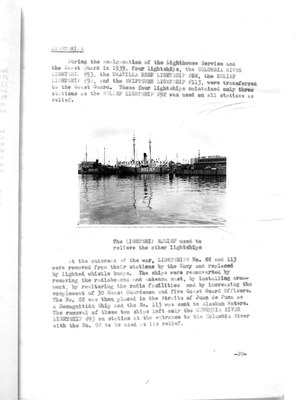 (Photo of Relief Lightship displayed with caption below)

The LIGHTSHIP RELIEF used to relieve the other lighthships

At the outbreak of the war, LIGHTSHIPS No. 88 and 113 were removed from their stations by the Navy and replaced by lighted whistle buoys. the ships were reconverted by removing the radiobeacon and antenna mast, by installing armament, by realtering the radio facilities and by increasing the complement of 30 Coast Guardmen and five Coast Guard Officers. The No. 88 was then placed in the Straits of Juan de Fuca as a Recognition Ship and the No. 113 was sent to Alaskan Waters. The removal of these two ships left only the COLUMBIA RIVER LIGHTSHIP #93 on station at the entrance to the Columbia River with the No. 92 to be used as its relief. 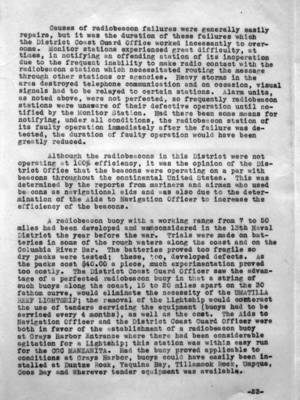 Causes of radiobeacon failures were generally easily repairs, but it was the duration of these failures which the District Coast Guard Office worked incessantly to overcome. Monitor stations experienced great difficulty, at times, in notifying an offending station of its inoperation due to the frequent inability to make radio contact with the radiobeacon station which necessitated routing the message through other stations or agencies. Heavy storms in the area destroyed telephone communication and on occasion, visual signals had to be relayed to certain stations. Alarm units, as noted above, were not perfected, so frequently radiobeacon stations were unaware of their defective operation until notified by the Monitor Station. Had there been some means for notifying, under all conditions, the radiobeacon station of its faulty operation immediately after the failure was detected, the duration of faulty operation would have been greatly reduced.

Although the radiobeacons in this District were not operating at 100% efficiency, it was the opinion of the District Office that the beacons were operating on a par with beacons throughout the continental United States. This was determined by the reports from mariners and airmen who used beacons as navigational aids and was also due to the determination of the Aids to Navigation Officer to increase the efficiency of the beacons.

A radiobeacon buoy with a working range from 7 to 50 miles had been developed and was considered in the 13th Naval District the year before the war. Trials were made on batteries in some of the rough waters along the coast and on the Columbia River Bar. The batteries proved too fragile so dry packs were tested; these, too, developed defects. As the packs cost $40.00 a piece, much experimentation proved too costly. The District Coast Guard Officer saw the advantage of a perfected radiobeacon buoy in that a string of such buoys along the coast, 15 to 20 miles apart on the 30 fathom curve, would eliminate the necessity of the UMATILLA REEF LIGHTSHIP; the removal of the Lightship would counteract the use of tenders servicing the equipment (buoys had to be serviced every 4 months), as well as the cost. The Aids to Navigation Officer and the District Coast Guard Officer were both in favor of the establishment of a radiobeacon buoy at Grays Harbor Entrance where there had been considerable agitation for a Lightship; this station was within easy run for the CGC MANZANITA. Had the buoy proved applicable to conditions at Grays Harbor, buoys could have easily been installed at Duntze Rock, Yaquina Bay, Tillamook Rock, Umpqua, Coos Bay and Wherever tender equipment was available.

Last edit about 3 years ago by Wjhoward
All 2 records

Show pages that mention UMATILLA REEF LIGHTSHIP in all works