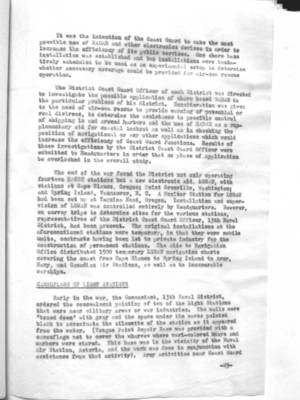 It was the intention of the Coast Guard to make the most possible use of RADAR and other electronics devices in order to increase the efficiency of its public services. One shore base installation was established and two installations were tentatively scheduled to be used as an experimental setup to determine whether necessary coverage could be provided for air-sea rescue operation.

The District Coast Guard Officer of each District was directed to investigate the possible application of shore based RADAR to the particular problems of his district. Consideration was given to the need of air-sea rescue to provide warning of potential or real distress, to determine the assistance to possible control of shipping in and around harbors and the use of RADAR as a supplementary aid for coastal lookout as well as in checking the position of navigational or any other applications which would increase the efficiency of Coast Guard functions. Results of these investigations by the District Coast Guard Officer were submitted to Headquarters in order that no phase of application be overlooked in the overall study.

The end of the war found the District not only operating fourteen RACON stations but a new electronic aid, LORAN, with stations at Cape Blanco, Oregon; Point Grenville, Washington; and Spring Island, Vancouver, B. C. A Monitor Station for LORAN had been set up at Yaquina Head, Oregon. Installation and supervision of LORAN was controlled entirely by Headquarters. However, on survey trips to determine sites for the various stations, representatives of the District Coast Guard Officer, 13th Naval District, had been present. The original installations at the aforementioned stations were temporary, in that they were mobile units, contracts having been let to private industry for the construction of permanent stations. The Aids to Navigation Office distributed 1500 temporary LORAN navigation charts covering the coast from Cape Blanco to Spring Island to Army, Navy, and Canadian Air Stations, as well as to innumerable warships.

Early in the war, the Commandant, 13th Naval District, ordered the concealment of painting of ten of the Light Stations that were near military areas or war industries. The walls were "toned down" with gray and the space under the eaves painted black to accentuate the silouette of the station as it appeared from the water. (Tongue Point Repair Base was provided with a camouflage net to cover the wharves where vari-colored buoys and markers were stored. This base was in the vicinity of the Naval Air Station, Astoris, and the work was done in conjunction with assistance from that activity). Army activities near Coast Guard

Show pages that mention Astoris in all works