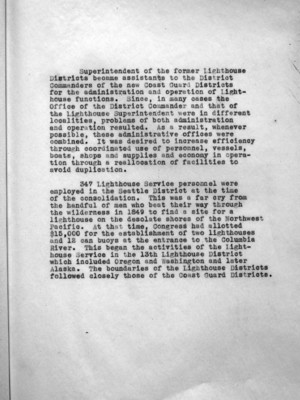 Superintendent of the former Lighthouse Districts became assistants to the District Commanders of the new Coast Guard Districts for the administration and operation of Lighthouse functions. Since, in many cases the Office of the District Commander and that of the Lighthouse Superintendent were in different localities, problems of both administration and operation resulted. As a result, whenever possible, these administrative offices were combined. It was desired to increase efficiency through coordinated use of personnel, vessels, boats, shops and supplies and economy in operation through a reallocation of facilities to avoid duplication.

327 Lighthouse Service personnel were employed in the Seattle District at the time of the consolidation. This was a far cry from the handful of men who beat their way through the wilderness in 1849 to find a site for a lighthouse on the desolate shores of the Northwest Pacific. At that time, Congress had allotted $15,000 for the establishment of two lighthouses and 12 can buoys at the entrance to the Columbia River. This began the activities of the Lighthouse Service in the 13th Lighthouse District which included Oregon and Washington and later Alaska. The boundaries of the Lighthouse Districts followed closely those of the Coast Guard Districts.

Show pages that mention Lighthouse Superintendent in all works