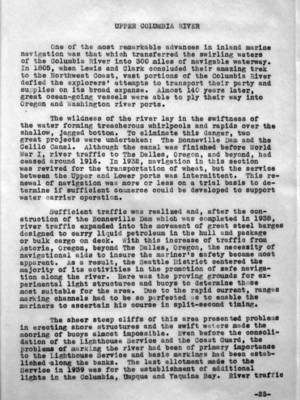 One of the most remarkable advances in inland marine navigation was that which tranferred the swirling waters of the Columbia river into 300 miles of navigable waterway. In 1805, when Lewis and Clark concluded their amazing trek to the Northwest Coast, vast portions of the Columbia River defied the explorers' attempts to transport their party and supplies on its broad expanse. Almost 140 years later, great ocean-going vessels were able to ply their way into Oregon and Washington river ports.

The wildness of the river lay in the swiftness of the water forming treacherous whirlpools and rapids over the shallow, jagged bottom. To eliminate this danger, two great projects were undertaken: The Bonneville Dam and the Celilo Canal. Although the canal was finished before World War I, river traffic to The Dalles, Oregon, and beyond, had ceased around 1916. In 1932, navigation in this section was revived for the transportation of wheat, but the service between the Upper and Lower ports was intermittent. This renewal of navigation was more or less on a trial basis to determine if sufficient commerce could be developed to support water carrier operation.

Sufficient traffic was realized and, after the construction of the Bonneville Dam which was completed in 1938, river traffic expanded into the movement of great steel barges designed to carry liquid petroleum in the hull and package or bulk cargo on deck. With this increase of traffic from Astoria, Oregon, beyond The Dalles, Oregon, the necessity of navigational aids to insure the mariner's safety became most apparent. As a result, the Seattle District centered the majority of its activities in the promotion of safe navigation along the river. Here was the proving grounds for experimental light structures and buoys to determine those most suitable for the area. Due to the rapid current, ranges marking channels had to be so perfected as to enable the mariners to ascertain his course in split-second timing.

The sheer steep cliffs of this area presented problems in erecting shore structures and the swift waters made the mooring of buoys almost impossible. Even before the consolidation of the Lighthouse Service and the Coast Guard, the problems of marking the river had been of primary importance to the Lighthouse Service and basic markings had been established along the banks. The last allotment made to the Service in 1939 was for the establishment of additional lights in the Columbia, Umpqua and Yaquina Bay. River traffic

1 page refer to Lewis and Clark

Show pages that mention Lewis and Clark in all works