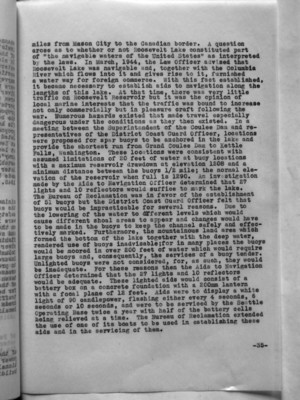 miles from Mason City to the Canadian border. A question arose as to whether or not Roosevelt Lake constituted part of "the navigable waters of the United States" as interpreted by the laws. In March, 1944, the Law Officer advised that Roosevelt Lake was navigable and, together with the Columbia River which flows into it and gives rise to it, furnished a water way for foreign commerce. With this fact established, it became necessary to establish aids to navigation along the lengths of this lake. At that time, there was very little traffic on Roosevelt Reservoir but it was the opinion of local marine interests that the traffic was bound to increase not only commercially but in pleasure craft following the war. Numerous hazards existed that made travel especially dangers under the conditions as they then existed. In a meeting between the Superintendent of the Coulee Dam and representatives of the District Coast Guard Officer, location were proposed for spar buoys to be anchored in the lake and provide the shortest run from Grand Coulee Dam to Kettle Falls, Washington. These locations were consistent with assumed limitations of 20 feet of water at buoy locations with a maximum reservoir drawdown at elevation 1208 and a minimum distance between the buoys 1/2 mile; the normal elevation of the reservoir when full is 1290. An investigation made by the Aids to Navigation Officer determined that 27 lights and 10 reflectors would suffice to mark the lake. The Bureau of Reclamation was in favor of the establishment of 51 buoys but the District Coast Guard Officer felt that buoys would be impracticable for several reasons. Due to the lowering of the water to different levels which would cause different shoal areas to appear and changes would have to be made in the buoys to keep the channel safely and effectively marked. Furthermore, the mountainous land area which formed the bottom of the lake together with the deep water, rendered use of buoys inadvisable; for in many places the buoys would be moored in over 200 feet of water which would require large buoys and, consequently, the services of a buoy tender. Unlighted buoys were not considered, for, as such, they would be inadequate. For these reasons then the Aids to Navigation Officer determined that the 27 lights and 10 reflectors would be adequate. These lighted aids would consist of a battery box on a concrete foundation with a 200mm lantern with a focal plane of 12 feet. Aids were to display a white light of 90 candlepower, flashing either every 4 seconds, 6 seconds or 10 seconds, and were to be serviced by the Seattle Operating Base twice a year with half of the batter cells being relieved at a time. The Bureau of Reclamation extended the use of one of its boats to be used in establishing these aids and in the servicing of them.

Show pages that mention Law Officer in all works