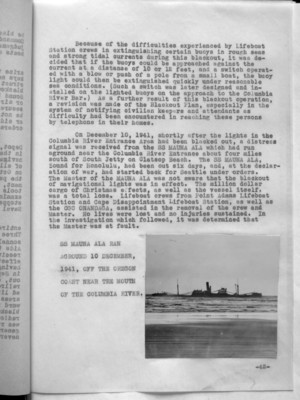 Because of the difficulties experienced by Lifeboat Station crews in extinguishing certain buoys in rough seas and strong tidal currents during this blackout, it was decided that if the buoys could be approached against the current at a distance of 10 or 12 feet, and a switch operated with a blow or push of a pole from a small boat, the buoy light could then be extinguished quickly under reasonable sea conditions. (Such a switch was later designed and installed on the lighted buoys on the approach to the Columbia River Bar.) As a further result of this blackout operation, a revision was made of the Blackout Plan, especially in the system of notifying civilian keepers and attendants as difficulty had been encountered in reaching these persons by telephone in their homes.

On December 10, 1941, shortly after the lights in the Columbia River Entrance Area had been blacked out, a distress signal was received from the SS MAUNA ALA which had run aground near the Columbia River Entrance about four miles south of South Jetty on Clatsop Beach. The SS MAUNA ALA, bound for Honolulu, had been out six days, and, at the declaration of war, had started back for Seattle under orders. The Master of the MAUNA ALA was not aware that the blackout of navigational lights was in effect. The million dollar cargo of Christmas effects, as well as the vessel itself, was a total loss. Lifeboat crews from Point Adams Lifeboat Station and Cape Disappointment Lifeboat Station, as well as the CGC ONANDAGA, assisted in the removal of the crew and Master. No lives were lost and no injuries sustained. In the investigation which followed, it was determined that the Master was at fault.

SS MAUNA ALA RAN AGROUND 10 DECEMBER, 1941, OFF THE OREGON COAST NEAR THE MOUTH OF THE COLUMBIA RIVER.

Show pages that mention Clatsop Beach in all works