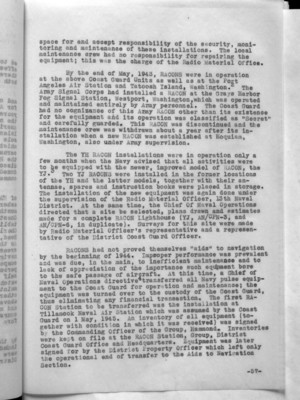 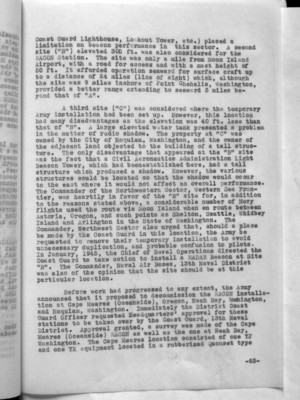 Coast Guard Lighthouse, Lookout Tower, etc.) placed a limitation on beacon performance in this sector. A second site ("B") elevated 300 ft. was also considered for the RACON Station. The site was only a mile from Moon Island Airport, with a road for access and with a mast height of 50 ft. It afforded operation seaward for surface craft up to a distance of 24 miles (line of sight) which, although the site was 9 miles inshore of Point Chehalis, Washington, provided a better range extending to seaward 3 miles beyond that of "A".

A third site ("C") was considered where the temporary Army installation had been set up. However, this location had many disadvantages as the elevation was 40 ft. less than that of "B". A large elevated water tank presented a problem in the matter of radio shadow. The property at "C" was owned by the City of Hoquiam, Washington, and the owner of the adjacent land objected to the building of a tall structure. The only disadvantage that appeared at the "B" site was the fact that a Civil Aeronautics Administration Light Beacon Tower, which had been established there, had a tall structure which produced a shadow. However, the various structures could be located so that the shadow would occur to the east where it would not affect an overall performance. The Commander of the Northwestern Sector, Western Sea Frontier, was heartily in favor of the "B" site for, in addition to the reasons stated above, a considerable number of Navy flights used the route via Moon Island when en route between Astoria, Oregon, and such points as Shelton, Seattle, Whidbey Island and Arlington in the State of Washington. The Commander, Northwest Sector also urged that, should a place be made by the Coast Guard in this location, the Army be requested to remove their temporary installation to avoid unnecessary duplication, and probable confusion to pilots. In January, 1945, the Chief of Naval Operations directed the Coast Guard to take action to install a RADAR Beacon at Site "B". The Commander, Naval Air Bases, 13th Naval District was also of the opinion that the site should be at this particular location.

Before work had progressed to any extent, the Army announced that it proposed to decommission the RACON installation at Cape Meares (Oceanside), Oregon, Neah Bay, Washington, and Hoquiam, Washington. Immediately the District Coast Guard Officer requested Headquarters' approval for these stations to be taken over by the Coast Guard, 13th Naval District. Approval granted, a survey was made of the Cape Meares (Oceanside) RACON as well as the one at Neah Bay, Washington. The Cape Meares location consisted of one YJ and one YK equipment located in a rubberized Quonset type 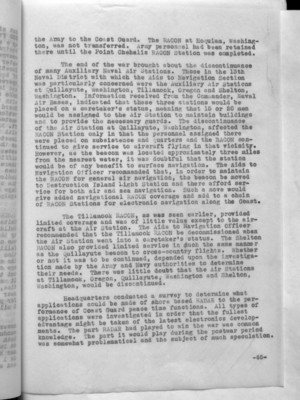 the Army to the Coast Guard. The RACON at Hoquiam, Washington, was not transferred. Army personnel had been retained there until the Point Chehalis RACON Station was completed.

The end of the war brought about the discontinuance of many Auxiliary Naval Air Stations. Those in the 13th Naval District with which the Aids to Navigation Section was particularly concerned were the Auxiliary Air Stations at Quillayute, Washington, Tillamook, Oregon and Shelton, Washington. Information received from the commander, Naval Air Bases, indicated that these three stations would be placed on a caretaker's status, meaning that 15 or 20 men would be assigned to the Air station at Quillayute, Washington, affected the RACON Station only in that the personnel assigned there were placed on subsistence and quarters and the RACON continued to give service to aircraft flying in that vicinity. However, as the beacon was located approximately three miles from the nearest water, it was doubtful that the station would be of any benefit to surface navigation. The Aids to Navigation Officer recommended that, in order to maintain the RACON for general air navigation, the beacon be moved to Destruction Island Light Station and there afford service for both air and sea navigation. Such a move would give added navigational RACON coverage and add a chain of RACON Stations for electronic navigation along the Coast.

The Tillamook RACON, as was seen earlier, provided limited coverage and was of little value except to the aircraft at the Air Station. The Aids to Navigation Officer recommended that the Tillamook RACON be decommissioned when RACON also provided limited service in much the same manner as the Quillayute beacon to cross-country flights. Whether or not it was to be continued, depended upon the investigation made by the Army and Navy authorities to determine their needs. There was little doubt that the Air Stations at Tillamook, Oregon, Quillayute, Washington and Shelton, Washington, would be discontinued.

Headquarters conducted a survey to determine what applications could be made of shore based RADAR to the performance of Coast Guard peace time functions. All types of applications were investigated in order that the fullest advantage might be taken of the latest electronics developments. The part RADAR had played to win the war was common knowledge. The part it would play during the postwar period was somewhat problematical and the subject of much speculation.

Last edit over 2 years ago by JohnnaMiller
All 3 records

Show pages that mention Hoquiam in all works