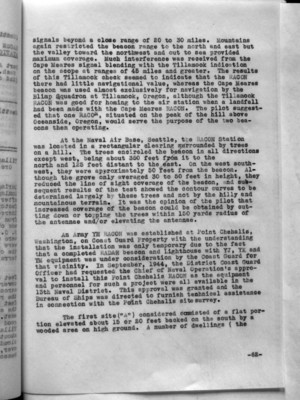 signals beyond a close range of 20 to 30 miles. Mountains again restricted the beacon range to the north and east but the valley toward the northwest and out to sea provided maximum coverage. Much interference was received from the Cape Meares signal blending with the Tillamook indication on the scope at ranges of 45 miles and greater. The results of this Tillamook check seemed to indicate that the RACON there had little navigational value, whereas the Cape Meares beacon was used almost exclusively for navigation by the Blimp Squadron at Tillamook, Oregon, although the Tillamook RACON was good for homing to the air station when a landfall had been made with the Cape Meares RACON. The pilot suggested that one RACON, situated on the peak of the hill above Oceanside, Oregon, would serve the purpose of the two beacons then operating.

At the Naval Air Base, Seattle, the RACON Station was located in a rectangular clearing surrounded by trees on a hill. The trees encircled the beacon in all directions except west, being about 350 feet from it to the north and 125 feet distant to the east. On the west south-west, they were approximately 50 feet from the beacon. Although the grove only averaged 30 to 50 feet in height, they reduced the line of sight coverage of the beacon, and subsequently results of the test showed the contour curves to be determined largely by these trees and not by the hilly and mountainous terrain. It was the opinion of the pilot that increased coverage of the beacon could be obtained by cutting down or topping the trees within 150 yards radius of the antennae and/or elevating the antennae.

An Army YH RACON was established at Point Chehalis, Washington, on Coast Guard Property with the understanding that the installation was only temporary due to the fact that a completed RADAR beacon and Lighthouse with YJ, YK and YM equipment was under consideration by the Coast Guard for that vicinity. In September, 1944, the District Coast Guard Officer had requested the Chief of Naval Operation's approval to install this Point Chehalis RACON as the equipment and personnel for such a project were all available in the 13th Naval District. This approval was granted and the Bureau of Ships was directed to furnish technical assistance in connection with the Point Chehalis site survey.

The first site ("A") considered consisted of a flat portion elevated about 15 or 20 feet backed on the south by a wooded area on high ground. A number of dwellings ( the

Show pages that mention Chief of Naval Operation in all works