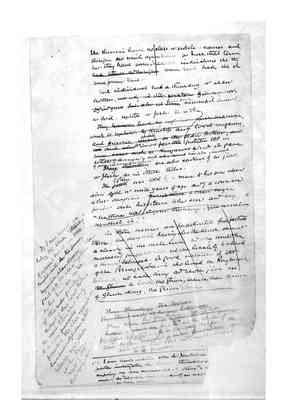 The Kurnai have no class or subclass names andtherefore no social organisation as I use that termbut they have unmistakable indications that they[had totems and therefore - crossed out] must have had that atsome former time.

These [thundung - crossed out] are also spoken of as jiakor flesh as in other tribes.

As these names are perpetuated from fathersto sons, the daughter having also the same, descentis clearly in the male line, and they would benecessarily perpetuated in the locality to whicha man belonged. A good instance is thatof the Bunjil-baul who lived on RaymondIsland in Lake King and whose jiak was [the Gluin - crossed out] a bird the Gluin, whence their nameof Gluin-Kong, the Gluin's beak.

(1) I am much indebted to the Revd John Bulmerfurther investigating the Kurnai Thundungconfirming my own endeavours, by obtaining a[which - crossed out] of [the - crossed out] old people which abundantly establishedof male descent.

[written in left side margin]If I am correct in believing that these "thundung"were at one time[consistent with the two primary - crossed out][class divisions - crossed out]part of a two class system thenwe have here an instanceof the peculiardevelopment of these coast tribes.The [original - crossed out] totem which accordingto my view [preexisted - crossed out]preceeded the class agnate[have ended through the] still[changes - crossed out] exist, whileit has beenreplaced by rhelocal organization. 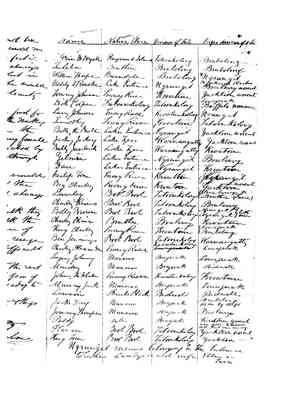 Ngrangit means belonging to the Entrance to Lakes. Lambys +c and wife Ellen are Tara

River and were called [Kutbriu-taura?] or Carriers of 'fire' their country being also so named - the prefix "Wurk" = 'carried' being understood. For instance the Brabra clan [underlined] munji subdivision [crossed out - The large secondary] was [crossed out - again] divided and

subdivided, each section occupying its own tract of hunting and food ground until the unit [crossed out - of this] [crossed out - local organization] was a small group of kindred - frequently merely an old man with his married or unmarried sons; the wives and grandchildren.

Such an instance was that of the Bunjil-baul or men of the Island a small family which lived on Raymond Island in Lake King and which claimed all the swans eggs laid on that island as their own and exclusive property. The males of this family also - inherited the name of ---- or in English was -----------, evidently a survival of a onetime totem. [5 lines crossed out ]

I have already mentioned the Woeworung tribe of the Yarra River and again take them as an instance. Here we find the old two class system existing under the familiar names Eaglehawk (Bunjil) and crow (waang). but the of [crossed out - the] totems there was only one named Thar) (Eaglehawk?). All others if they ever existed had died out - and that these were totems at one time maybe inferred not only from

Last edit 2 months ago by Christine 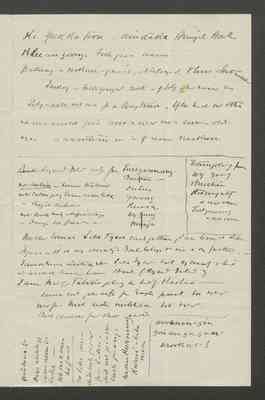 Jackey - Father youngest north - of Toby - his name wasToby - will not use for a long time. If he had no othername would give him a new one - some oldman a [??] [??] if none narkun.

no lake men did not go farfrom lakes -did not go in thebush far away. 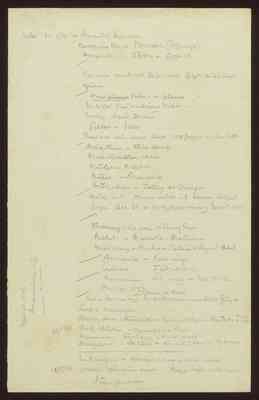 [written in left side margin]Ngal-al-balDaramulun's wife

Last edit about 1 month ago by ALourie
All 5 records

Show pages that mention Raymond Island in all works