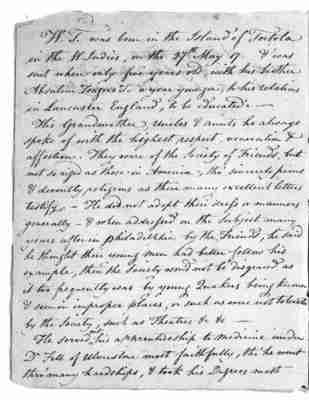 W. T. was born in the Island of Tortolain the W. Indies, on the 27th May 17 & wassent when only five years old, with his brotherAbsalom Zeagues T--a year younger, to his relationsin Lancaster England, to be educated.--His Grandmother, Uncles & Aunts he always spoke of with the highest respect, veneration &affection. They were of the Society of Friends, butnot so rigid as those in America, tho' sincerely pious& devoutly religious as their many excellent letterstestify.--He did not adopt their dress or mannersgenerally--& when addressed on the Subject many years after in Philadelphia by the Friends, he saidhe thought their young men had better follow hisexample, then the Society wou'd not be disgraced asit too frequently was by young Quakers being known& seen in improper places, or such as were not toleratedby the Society, such as Theatres &c &c--

He served out his apprenticeship to Medicine underDr. Fell of Ulverstone most faithfully, tho' he wentthro' many hardships, & took his Degrees most

Last edit about 1 month ago by shashathree
1 record

Show pages that mention Dr. Fell of Ulverstone in all works