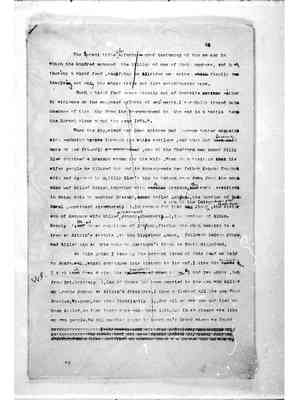 The Kurnai tribe also affords good instances of the manner inwhich kindred avenged the killing of one of their members, and howtherby a blood feud, ramifying on all sides may arise, finally involving not only the whole tribe but also neighbouring ones.

Such a blood feud arose usually out of homicide eitherby violence or the supposed affects of eviul magic. I carefully traced outone case of this taking frim its commencement to its end in a battle betweeenthe Kurnai clans about the year 1856-7.

When the Gippsland and Omeo natives had come better aquainswith each other through the white settlers, and thus had [been made- crossed out] becomemore or less friendly [to each other - crossed out], one of the Theddora men named BillyBlew obtained a Braiaka woman for his wife. When on a visit to hiswife's people he illused her and in consequence her father Kaiung foughtwith and speared him. Billy Blew's kin in return came down from the mou-tains and killed Kaiung, together with a [another- crossed out] Braiaka, [and- crossed out] they were assistedin doing this by another Braiaka called Lohni, the borther [sic] of Bu-dawal, mentioned elsewhere. (p ). In revenge for this [one - crossed out] a man of the Dairgo division of the Brabo clan, the sisterson of Kaiung's wife killed, a man called Johnny. Flanner (p ), the brother of Gliun-kong (p ), [and - crossed out] He and other relations of Johnny, finding his skin hanging in a tree at Aitkin's Straits, at the Gippsland Lakes, followed Dairgo Johnnyand killed him at Erin vale on Merriman's Creek in South Gippsland.

At this point I take up the account given of this feud as toldby Bunda-wal, which continues this history to its end. I give his account asI toook it down during his narrative to me. "I had two wives, bothfrom Brt-britta (p ), One of these had been married to the man who killedmy brother Johnny at Aitkin's Straits. I then collected all the men fromBruthen, Wy-yung. and from Binnijeri (p ), for all my own men had died orbeen killed, so that there were only boys left. But these others were likemy own people. We all sneaked round to Merriman's Creek where we found 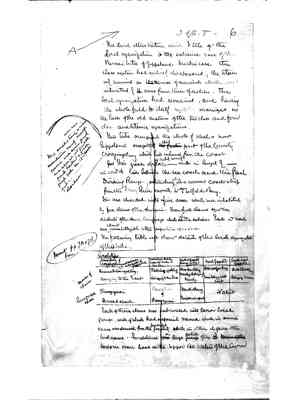 O of A. T. 6AThe third illustration which I take of the local organization is the extreme case of the Kurnai tribe of Gippsland. In this case theclass system had entirely disappeared, the totems only survived as [the - crossed out] names of animals which were inherited by [the - crossed out] sons from their fathers. The local organization had remained, and having the whole field to itself regulated marriages in the lines of the old customs of the two class and four class and totemic organizations.

This tribe occupied the whole of what is now Gippsland excepting [the greater - crossed out] that part of the country Croajingolung which lies inland from the coast. This great area of tribal country ___ miles in length by ___in width lies between the sea coast and the Great Dividing Range, extending also in a narrow coast strip from the Snowy River mouth to Twofold Bay.

[written in left side margin to go above "This great area of tribal---"]This exceptional hard even now a wild mountainous country mostly covered with dense [?trees?] and almost impenetrable scrub [?hosted?] a small jungle tribe the Biduelli of [unknown?] men elsewhere

It was divided into five areas which were inhabited by five clans of the Kurnai. These five clans spoke dialects of the same language which in the extreme east and west were almost unintelligible to the respective speakers. The following table will observe details of this local organization of this tribe.

Each of these clans was subdivided into lesser local groups, each of which had special names which in some cases was derived from the principal locality while in others it gave the local name. For instance a large section of the [crossed out - ? many of the] western men lived in the Upper [crossed out - pog] waters of the Avon

Last edit 19 days ago by ALourie 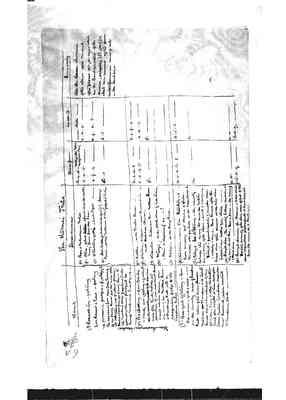 [Column 1, row 2](2) Brabralung - from Bra-bra manly and (ga)lung = if or belonging to all the [crossed out - country waters of the] drainage areas of the Tambo, Mitchell, and Nicholson Rivers with the [?] tributaries to their extreme sources, also to the weir on the Mitchell River to Providence Ponds, with a corresponding frontage to the Gippsland Lakes.

[Column 1, row 3](3) Bra-yak-(g)alŭng = him Bra = man, yak = west - all the country west of Providence Ponds watered by the Avon, [crossed out - River]] Macalister [crossed out - and] Thompson and Latrobe Rivers down to the junction of these two latter & thence [?] valley the eastern bank of the Latrobe to Lake Wellington thence - eastward by the lakes to somewhere near [?], thence northward to Providence Ponds.

Row 2 - (e) Bruthen, in the Tambo River(f) Waiŭng = widgeon - near Bairnsdale in the Mitchell River(g) Wŭk-wŭk = Lindeman Flat. Mitchell River(h) Mŭnji = on the north shore of Lake Victoria= There! or "the place of" e.g. -?(i) Dairgo - on the Dargo River

Row 3(k) Kŭtbūn-baura from Kŭtbūn = to have or carry and baura = fire. The name also of a hill or the upper Avon River.(l) Bŭnjil Nŭlŭng - the country between the Avon River and the Eastern boundary of the clan, south of Stratford - Bŭnjil = personal appelates of the older men-Nŭlŭng = mud. Named after the Head man of the division at the time when Gippsland was settled by the whites -(m) Bunjil-clan - the country between the Avon and the Macalister Rivers. Dan = emu - the name of a Head man -(n) Bunjil-Kraura from Kraura = west wind [Northern?] country of the clan west of [north?] to them almost impenetrable forested scrub in west Gippsland from the name of the Headman.

Column 3 title Wives fromRow 1 a) wives from b c d and Mallagoota Inlet and Twofold Bayb) wives from c a t and [p. 13] Bina-jera (the long strip of sandy and swampy country lying between the Gippsland lakes and the sea as far as the Entrance to the Lakesc) Brüthen – on the Tambo River – Waiūng Widgeon – near Bairnsdale Mitchell River and Kŭbbūn laura – Upper Avon Riverd) b and Bina-jera (see b) or is it I = Būnjil Nŭlŭng – between Avon River and eastern boundary of clan south of the Stratford 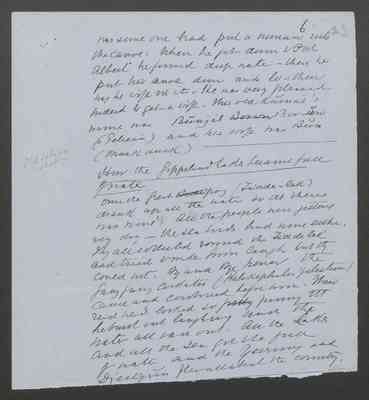 was some one had put a woman intothe canoe. When he got down to PortAlbert he found deep water - then heput his canoe down and lo - there was his wife in it. He was very pleasedindeed to get a wife. This old Kŭrnai'sname was Būnjil [Boron - crossed out] Bor-ŭn(Pelican) and his wife was Bŭn(musk duck)

How the Gippsland Lakes became full of waterOnce the Great [Bull - crossed out] frog (Tidde-lek)drank up all the water so that therewas none left. All the people were gettingvery dry - the sea birds had none either.They all collected round Tidde lekand tried to make him laugh but theycould not. By and Bye however theGang gang cockatoos (KaloKephaler galeatum)came and coroboreed before him. Theirread [sic] heads looked so funny that he burst out laughing and thewater all ran out. All the Lakesand all the sea got to be fullof water and the Yeerung andDjeetgŭn flew all about the country. 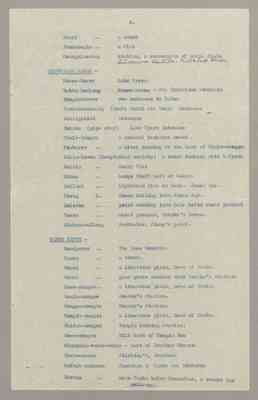 Show pages that mention Gippsland Lakes in all works