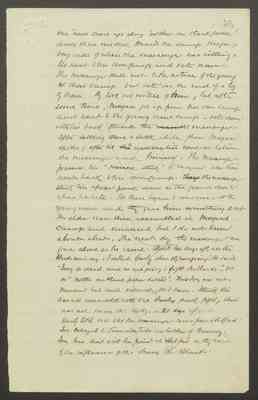 23me "new come up along 'nother one blackfellow"and then walked towards the camp keepingvery wide of where the messenger was sitting.He went to his own camp and sate down.The messenger did not take notice of the youngin their camp but sate on the end of a logby them. They took no notice of him, but aftersome time, Morgan got up from his own campand went to the young mens camp - sate downwith his back towards the [man that - crossed out] messenger.After sitting there a little while then Morganspoke; after that [the - crossed out] a conversation went on betweenthe messenger and himself. The Messengerpassed his "message stick" to Morgan who thenwent back to his own camp. [The yo - crossed out] The messengerstuck his spear point down in the ground close towhere he sate. He then began to converse with theyoung men and they gave him something to eat.The elder men then assembled in Morgan's camp and conversed but I do not know about what. The next day the messenger wasgone along as he came. About two days after all theblacks went away. I asked Darby where they were going. He said"Joey is dead and we are going to fight the blacks" - thator "nother one black fellow killed". This Joey was notmurdered but died naturally; that I know. I think thiswas all connected with the Bushy Park fight, whichwas not more than 14 or 21 days after it.

Darby told me that the messenger came from Stratford.Joe belong to Tarraville tribe - a brother of Browney.Joe had died with his friends at that [?feud?] as they said by the influence of the Snowy Rv Blacks.

Show pages that mention Joe in all works