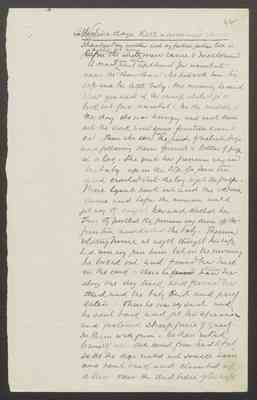 42[A - crossed out] Native dogs kill a woman and child I have heard my mother and my father’s father tell a story of a timeBefore the white men came to MelbourneA man of my tribe went up to hunt for wambats near Mt Baw Baw. He had with him his wife and little baby. One morning he said to her you wait at the camp while I go to look out for a wambat. In the middle of the day she was hungry and went down into the creek to cut some ferntrees down toeat. There she saw the fresh tracks of native dogs and following them found a litter of pups in a log. She put her possum rug and the baby up in the top of a fern tree and crawled into the log to get the pups. These began to howl out and the old ones came and before the woman could get any out, caught her and killed her. Then they pulled the possum rug down off the fern tree and killed the baby. The man returning home at night thought his wife had run away from him but in the morning he looked out and had found her tracks in the creek – there he [found - crossed out] saw her along the dog track and found her dead and the baby dead and partly eaten. Then he was very sad and he went back and got his spears and fastened sharp pieces of quartz on them with gum. He then rubbed himself all over mud from head to foot so that the dogs could not smell him and went back and climbed up a tree near the dead bodies of his wife 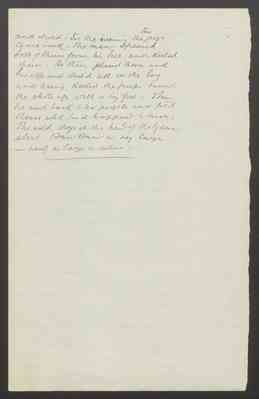 and child. In the evening the two dogs came back. The man speared both of them from his tree and killed them. He then placed them and his wife and child all in the log and having killed the pups burned the whole up with a big fire. Then he went back to his people and toldthem what had happened to him. The wild dogs at the head of the Yarraabout Baw Baw are very large – nearly as large as calves. 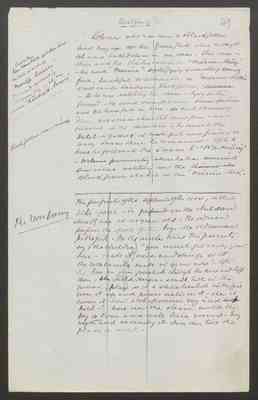 Loh-an who was once a Blackfellow lived long ago at the Yarra flats where he caught eel and baked them in an oven. This oven is there and the Kūlin called it “márine-thŭng” – the word “marine” signifying something specially fine, beautiful or admirable; as “márine-Kūllin” a well made handsome blackfellow, [“ marine - crossed out] – As he was watching his oven - lying on the ground - the wind carried some swans feathers and let them fall on him. He said to himself “there are swans where that came from – and travelled in that direction” – he came to the Inlets – + Yalluk in Western port and finding so many swans there he remained. After a time he followed the swans to - “Wa-mŭng” - Wilson’s Promontory where he has remained ever since watching over the [Kŭrnai who - crossed out]Black fellows who live in the “Márine-Bek”.

The perforation of the septum of the nose, called Ilbi-jerri – is performed on the children when they are 10-12 years old. The old men perform the operation for the boys - the old women for the girls. In the winter time the parents say to the children “you must get ready your bone – make it nice and sharp so that the hole can be made in your nose”. After the bone has been pushed through the nose and left there, the child scrapes a small hole in the ground, places in it a stone heated in the fire covers it up and pours water on it; then it covers its head with a possum rug and [hol - crossed out]hold its nose over the steam until the peg is loose and will turn round. Every night and morning it does this till the place is [?well?].

Last edit 24 hours ago by IClark 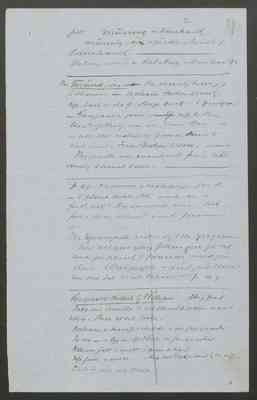 Kangaroo killed by William I being presentTake out inside – not skinned unless want skin. Then roast him. William & his wife & children – one fore quarter.To me - a leg or if I like a fore quarterWilliam father & mother, arm & head.Wife father & mother – leg and back, sent by the wife.Tail to any one there.

Last edit 25 days ago by ALourie
All 4 records

Show pages that mention Baw Baw in all works