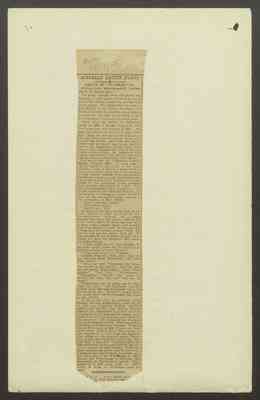 [newspaper article]Argus28/4/06Suburban Native NamesOrigin of “Prahran,” &c.Writing from Merchiston-Hall, Geelong, Mr. G. F. Belcher says: -“In going through some old papers not long since I came across a letter from an old friend, Mr George Langhorne, dealing with native names. Mr Langhorne was sent to Port Phillip by the Sydney Governor (Sir Richard Bourke) to establish an aboriginal protectorate, the chief object being to look after the moral training of native boys.

“Soon after my arrival in Melbourne (early in 1839) I became acquainted with Mr Langhorne, who arrived in 1836. His camp was situate on the Yarra, near “Punt Hill.’ Many an evening I spent with him in his tent, which was surrounded by the mia-mias of the natives. As a rule, the natives never cared to remain long in any locality, and so Mr Langhorne moved about fromtime to time, changing his camp to suit the wishes of his proteges. Mr Langhorne held a great influence over the natives, and often was the means of preventing tribal fights.”

The letter from Mr Langhorne is dated Botany, October, 1889. It runs thus: - “With regard to the origin of the word ‘Prahran’ – now, I believe, a large town or city – on a mizzley, rainy day of late autumn in 1837 Robert Hoddle (surveyor-general) strolled into my hut, at the Government sta-tion at Pur-ra-ran, for so I named it - a com-pound of two aboriginal words, meaning land partially surrounded by water. This was the aboriginal station assigned to me by the Governor (Sir Richard Bourke), for the purpose of forming a nucleus establish-ment for the care and Christian training of the aborigines of Port Phillip.

“It was a lovely spot, at the bend of the river, opposite to what we call the 'Go-vernment-house Paddock,’ on a rising ground, forming a fine, grassy slope to the river, well cropped by sheep that had been a short while camped there after landing from Van Diemen’s Land. In the rear was a large and picturesque swamp, which thenatives told me was named after me. To the southward was a rising ground, from which we could see Hobson’s Bay, about two miles distant.

“ ‘I have called on you,’ said Hoddle, ‘to get some native names for the districts or parishes around in county Bourke.’

“Hoddle went on, ‘Now, first, what do you call this place, ‘Purrarhan,’ and ‘Jika Jika’ after?’

“ ‘After the chief, Wanorong, who claims the district as his country. And you may call one parish “Kulbundora,” others “Ker-bukena,” “Yall Yall.” Tullamarena,""Tallanghata." "Tarook" (the names of several fine boys, who were with me in camp).’

“Kulbundora was the eldest son of Jika-Jika, the chief. Old Tukulneen was the former chief, but was superseded owing to his advanced age. ‘Tarook’ I named after the black crow, which abounded that time in the district.’

“A day or two after my interview with Hoddle, the boy Kulbundora, a fine lad of 14, who was acquiring English rapidly, walked into my hut, and, seating himself close to me, commenced to exhibit proof of his progress in the language by singing ‘what shall we do with the drunken sailor early in the morning?’ He mimicked the drunken man as he sang the refrain. The song he had learned at a brickmakers’ canteen. When I visited Melbourne in 1851 (I have not been there since), passing down Collins-street I was startled by a voice from the opposite side calling out my (native) name, Tukul-reen, when a tall black ran over to me. ‘Ah, Yall Yall, is that you?’ I inquired after the lads mentioned above, and received the sor-rowful answer to each inquiry, ‘To-Ke-Ko lang’ (all dead and gone), only 12 years after I resigned the care of them. I presume now that very few of the Wawarongs of Mel-bourne, the Watowrongs of Geelong, the Borawongs of Westernport remain. They numbered in 1837 about 1,000 or 1,200; within 50 miles of Melbourne none re-main.”

Show pages that mention Collins-street in all works