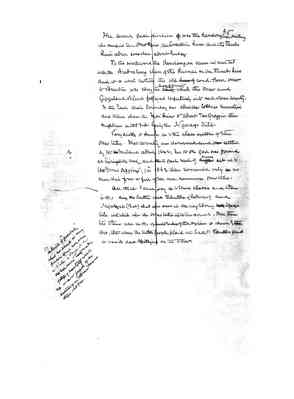 The second great division [crossed out - of] was the Kangandora-mittung who occupied the Omeo Plains, the Livinestone River [Livingstone Creek] and the Tambo River above somewhere about Ensay.

To the southward the Kandangora came in contact with the Brabralung clan of the Kurnai in the Tambo River and it is worth noting the old [crossed out: line of] road from Omeo to Bruthen was along the [crossed out: back] [written above: line of country] which the Omeo and Gippsland Blacks followed respectively into each others country. To the East their boundary was about the Cobberas mountain and thence down the Indi River to about Tom Groggin then neighbours on that side being the Ngarego tribe.

Very little is known as to the class system of the Omeo tribe. That country was discovered and then - crossed out] settled by McFarland about 1842. In 1852 gold was found at Livingstone Creek and [the -crossed out] a great rush of [diggers - crossed out] miners set in to the "Omeo Diggings"; in 1862 there remained only [on - crossed out] no more than four or five of the once numerous Omeo tribe.

All that I can say as to their classes and totems is that among the latter were [Tebuteba?] - (Rabbit rat) and [Najabejan?] (Bat) which also occur in the neighbouring [crossedout - half] Ngarejo tribe with which also the Omeo tribe intermarried. That these two totems were on the opposite sides of the system is shown by [crossed out - them] this, that when the tribes people plaid at ball (1) Tebuteba plaid on one side and Najatejan on the other.

[Left margin note](1)A kind of ''football'' which was plaid in many parts if not eveerywhere in Victoria & South of [??] the ball either being made of strips of pelt tightly rolled up or as in popular if the scrotum of an "old man" Kangaroo stuffed with grass.

Last edit 7 months ago by Christine 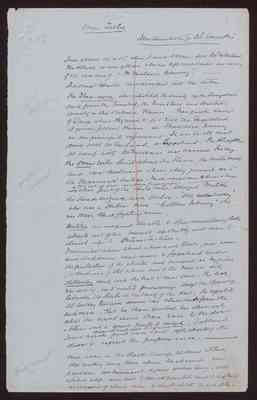 TribesI was about 14 to 15 when I went to Omeo with Mr McFarlane.Tha Blacks or any of them who are left will know me wellby the name of "McFarlane's Johnny!"The Omeo Blacks were divided into two tribes.The Thed-dora who inhabited the country up the LivingstoneCreek from the Township, the Jim + Jack and Butcher'sCountry = the Victoria Plains. These people knewof Dargo where they used to go to kill the Dargo Blacks.A young fellow known as Theddora Johnny was my principal informant. It was he that wentdown with McFarlane to Gippsland. The Blackfellowthat went with McMillan was named Friday.The Omeo tribe lived about the Plains, the Mitta Mittaand over eastward where they joined on tothe Maneroo tribes. They also extended down Bindi to Tungeobut not as far as Numlamungie.

Medicine MenTo this part of the whole tribe belonged Metokothe Head wizard and Doctor. "Old cockey"who was a Doctor and "Cobbon Johnny" whowas then Head fighting man.Metoko was supposed to be able to blow something likecobwebs out of his mouth up to the sky and then toclimb up to Drŭm-ŭ-lŭn.I remember when about a hundred blacks, men, womenand children went down to Gippsland underthe protection of the whites and camped at Heyfield(McFarlane's) that when one of the men was sickOld Cockey went into the hut to cure him. The cookwas sent by us to watch proceedings through the openingsbetween the slats at the back of the Hut. He reportedthat Cockey turned down the blankets from the sick man. That he then sucked his stomachabout the navel and then ran to the door- blew out a great puff of wind, jabberedsome words clapping his hands together at the same time and ran back after shutting the door to repeat the performance.

Bull roarerOnce when in the blacks' camp at Omeo stationOld Cockey being there alone he shewed mea wooden instrument a few inches long - withnotched edge, and tied by its pointed end to a stringat the end of which was a short stick handle.

Last edit 26 days ago by ALourie
All 2 records

Show pages that mention Livingstone Creek in all works