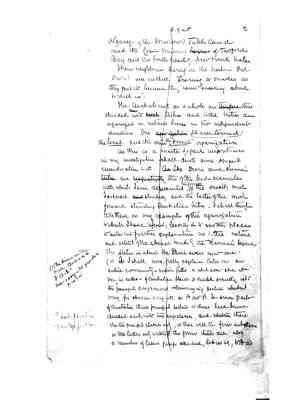 2Ngarego of the Maneroo Tablelandand the Coast Murring [beyon - crossed out] of Twofold Bay and the South coast of New South Wales.

Their neighbours living in the Western Port District were called [Thuring?] or snakes as they put it because they came snaking about to kill us.

The Australians as a whole are [crossed out - therefore] thus divided into tribes and these tribes are organized in certain lines in two independent directions. One [2 words crossed out] I have termed the local [underlined] and the other the social [underlined] organization.

As this is a matter of great importance in my investigation I shall devote some special consideration to it. The Dieri and Kurnai [crossed out - tribes] are [crossed out - respectively] two of the best examples with which I am acquainted. The former of the [?] most backward [crossed out - and] standing and the latter of the most forward standing Australian tribe. I shall therefore take them as my examples of the organization which I have inferred, leaving it to another place to enter into further explanation as to the nature and extent of the advance made by the Kurnai beyond the States in which the Dieri even now are

(1) As I shall more fully explain later in an entire community-nation tribe or which ever else itmay be called - of Australian blacks is divided socially inot the principal exogamous intermarrying section which may for shorten designate as A and B. In some parts of Austrlaia these principal sections or classes have been divided each into two supclasses [or subclasses?], and whether there the two principal classes only, or those with the four subclasses or the latter only without the former there are also a number of lesser groups attached, let us say, to A and

Last edit about 1 month ago by J Gibson 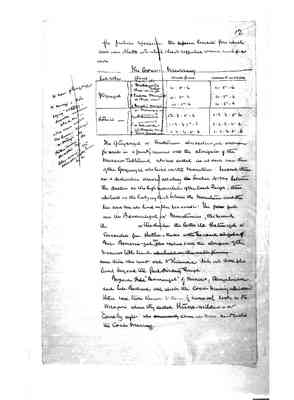 The Gūyangal or Southerners also exchanged women for wives in a friendly manner with the aborigines of the Maneroo Tableland who were called as in deed men then of the Guyangal who lived in the mountains. Indeed there was a distinction drawn all along [thi - crossed out] Southern NSW between the dwellers in the high mountains of the Coast Ranges, those who lived in the lowlying inland between the mountains and the sea and those who lived on the sea coast. The [from - crossed out] first were the Bemeringal or Mountaineers, the second the ____ [Howitt left this space blank] or tree dwellers the latter the Katun-gal or sea coasters from Katŭn = the sea or the Sea coast [and gal = f - crossed out]But Bemerin-gal was also applied to all the aborigines of the Maneroo Tableland [who lived in the water flowing - crossed out] even those who went out to Kiandra but not those who lived beyond the Great Dividing Range.

Beyond the "Bemeringal" of Maneroo, Queenbeyanand Lake Bathurst with whom the coast Murring [?inter?]there were tribes known to them by name only such as theWiradjuri whom they called Kūna-mildais - or ‘come by night’ who [occasionally - crossed out] came at times and killed the Coast Murring

Last edit about 1 month ago by J Gibson 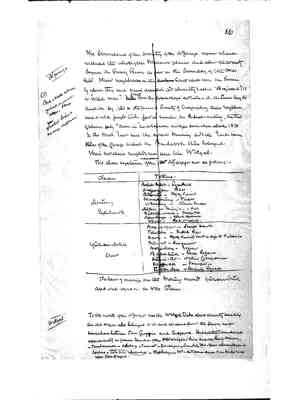 The boundaries of the country of the Ngarego appear to have included the whole of the Maneroo plains and also the country beyond the Snowy River as far as the boundary of the Omeo tribe. Their neighbours in the [Western - crossed out] South west were the Kurnai by whom they were much dreaded and whom they called “Brajerak”(1)or ‘Wild men’ [To the - crossed out] South over the coast range and between it, the Lower Snowy Riverand the sea, that is the present County of Croagingoling their neighbours were a wild jungle tribe, few in number, the Bidwell-mitung, the last of [?whome?] only “came in” and became civilized somewhere about 1870.In the south East are the Coast Murring and to the East were tribes of the group to which the Braidwood tribe belonged. Their northern neighbours were the Wolgal.

The class system of the Ngarego/Ngarigo was as follows:-

The law of marriage was that Merūng married Yŭk-em-brŭk and visce versa as to the totems.

To the north of the Ngarejo was the Wolgal tribe whose country according an old man who belonged to it and who came from the Hume River Hume River/Murray River somewhere between Tom Groggin and Cudjewa. [He?] fixed the boundaries approximately as follows. Junction of the Walarigari River and the River Murray; - Tumberumba - Adelong - Tumut - Gundagai - Lambing Flat - Yass - Queanbeyan - Cooma - [Gibs? Hole - Kiandra - Thelbingun Mt - and thence around the Indi River near Tom Groggin. 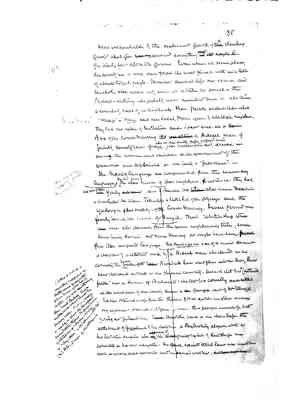 more impenetrable by the exuberant growth of [the - crossed out] a climbing grass (1) which often [rose up - crossed out] [?embraced?] everything [with in its ?? li - crossed out]for twenty feet above the ground. Even when in some places the country was a more open forest the river flowed with in a belt of almost tropical jungle. Moreover animal life was scarce and the whole area could only support a tribe as small as the Biduell-mittŭng who probably never numbered more in all than a couple of score of individuals. These people called themselves “maap” – men and were looked down upon by all their neighbours. They had no system of Initiation and I saw once at a [Kuriu - crossed out]Bora of the Coast-Muring [sic] that [one of these - crossed out] a Biduell man of probably seventy years of age who was then visiting them on friendly terms was contemptuously driven in among the women and children at the commencement of the ceremonies and left behind as not being a “full man”. -

The Biduell language was compounded from the surrounding languages. They had some of the class names of their neighbours, for instance they hadthe sex totem [here - crossed out] Yirŭng [cut men - crossed out], and I observed the [totem - crossed out] class name "Yukanbrŭk= crow and the totem Tchuteba = Rabbit Rat of the Ngarego and theYalonga = Rock Wallaby - of the Coast Muring [sic]. I even found onefamily bearing the name of Bunjil. Their relationship terms[are - crossed out] were also derived from the same neighbouring tribes, someterms being Kurnai and some Muring as might have been forecastfrom their composite language. The prime facie case of a mixed descent is strengthened by a statement made by a Biduell man who claimed as his country the upper valley of the [upper - crossed out] Broadribb River which flows into the Snowy Rivernear the coast and thus in the Kurnai country. He said that his “father’s father” was a Kurnai of Buchan (1) who left his country and settled in the small piece of open county known as [the - crossed out] Goungra, west of Mount Ellery. (2)His son obtained a wife from the Thedora of Omeo, the son of this marriage, my informant, married a Ngarego woman. This pedigree accounts for both Yirŭng and Yŭkembrŭk. [Such - crossed out] Another case is one where before the settlement of Gippsland by the white man, a Brabrolŭng eloped with his brother’s daughter who according to the classificatory system of kinship was counted as his own daughter. The offence againt tribal law was one of the most serious he could commit and he escaped with her. [and was not seen - crossed out]

[written in left side margin](1)

(1) this is not as isusually supposed aScotch name given to theplace by some of the Earlysettlers who were [mostly - crossed out] [??]from North [??] but anative word which should beproperly written Bŭkan, meaninga net bag in which the blackfellowscarried their things. The proper nameof the place is "Bŭkan-munji"or "Bag-there" or the "place of the bag"(2) Būrrūmpa of the aborigines 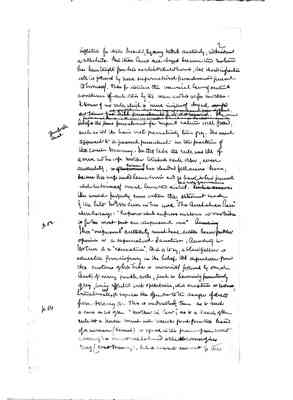 inflicted for there breach, by any tribal authority, individual or collectives. But these laws are obeyed because the native has been taught from his earliesdt childhood, that their infraction will be followed by some supernatural ounishments present to himself. Take for instance the universal law of mutual avoidance of each other by the man and his wife's mother. I know of no rule which is more implicitly obeyed and I know [3 lines crossed out]. The unusual

Beliefs that some punishment of a [?] nature will [?], suxh as that the hair will permanently turn grey. The nearest approach to a personal punishment is the practice of the Coast Murring. In that tribe the rule was that ifa man and his wife’s mother touched each other, even accidentally, or even if her shadow fell across him, his wife would leave him and go back to her parents while he himself must leave the district. This rule of avoidance [Such a case as - crossed out][this - crossed out] would properly come within the statement madeby the late Mr E M Curr in his work "The Australian Race"where he says: "The power which enforces custom in our tribesis for the most part an impersonal one."

This "impersonal" authority must have either been public opinion or a supernatural sanction. Alluding to Mr Curr it is "education", that is to say, a blackfellow is educated from infancy in the belief that departure from the customs of his tribe is invariably followed by one, at least, of many possible evils, such as becoming prematurely grey, being afflicted with opthalmia, skin eruptions or sickness, but above that all the [?] the offender to the danger of death from sordery (2). This is undoubtedly true as to such a case as that of the "mother in law"; as to a breach of the rule that a novice must not receive food from the hand of a woman (Kurnai) or speak in the presence of one without covering his mouth with his hand or the corner of his rug (Coast Murring), but it does not account for the

Show pages that mention Thawa in all works