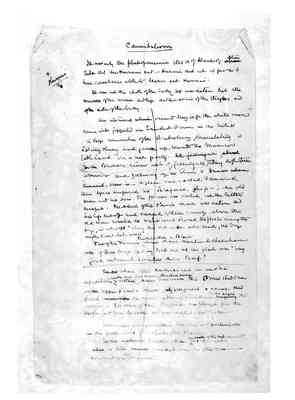 CannibalismKurnaiIt was only the flesh of enemies that is of blacks of othertribes that the Kurnai eat - Kurnai did not so far as Ihave even been able to learn eat Kurnai.

It was not the whole of the body that was eaten but themuscle of the arms and legs and the skin of the thighs andof the sides of the body.

An instance [which - crossed out] occurred long before the white men came into Gippsland was handed down in the tribes. A large number of the Brabrolung, Krauatalung and Tatungolung had gone up towards the Maneroo tableland in a war party. [At Gellingall, about - crossed out]On the Buchan River west of Gellingall they left theirwomen and following up the River to [Fann where - crossed out][Fanwick now is - crossed out] a place called Fanwicktheir spies surprised two Brajerak (see p._), an old man and his son. The former was killed, but the latter escaped. The skin of the slain man was eaten andhis legs cut off and carried to their camp, where the old men roasted the meat and shared the flesh among the boys, in order that “when the old men were dead, the boys might know what to do”.

Though the Kurnai Tankowillin + Blair where I have mentioned elsewhere were of these boys and they told me that the flesh was "verygood and much sweeter than Beef."

[On an - crossed out] When the Kurnai were on anotherexpedition under their Head man Bruthen munji to attack their Enemies the Omeo Theddoraon the Upper Tambo River, they surprised a camp thenkilled [some of the - crossed out] the men and some children, but kept [keeping -crossed out] thewomen. The skin of these Brajeraks was flayed from the thighs and from the sides and was roasted and eaten.

Women were not permitted to see this or to participatein the feast [??] of the spoils of the slain.

[In this instance- crossed out] Tankowillin the [?taster?] of the last mentioned was an actor[also - crossed out] in this [cannot] case and was one of the spies whodiscovered the two Brajeraks.

Last edit about 19 hours ago by ALourie 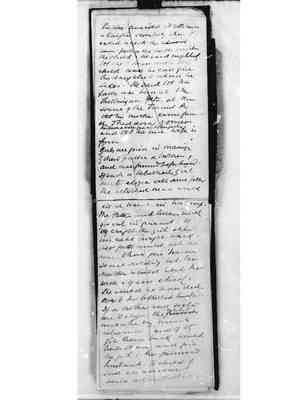 He also considers it villainous- laughed [??] carefully? when Iasked whether the father the mother [??]the child. He said [completely?]no the "man works the child and he call girl his daughter for whom helikes." He said that hisfather was [born?] at theThelbuigunj Mtn at thesource of the Tumut Rvr. That his mother came fromthe Theddora of Omeoand that his won wife isfromgirls all given in marriageby their father and brotherand all promised beforehand.If such a betrothed girlwere to elope with some fellowthe betrothed man [??

sit at home in his camp.The father and brothers wouldgo out in the pursuit. Ifthey caught the girl shewould be brought back.Her father would not do[???]sever scolding but hermother would [?] herwith a ram stick.She would be handedover to her betrothed husband.If a brother and sister were to elope the [??]ashamed and if [??]girl then back would[????] servre scalding ? her mother would beat with a yam stick. She would be given back ? over to her bethrothed husband. If her brother or sister were to elope the ? would be much ashamed and it 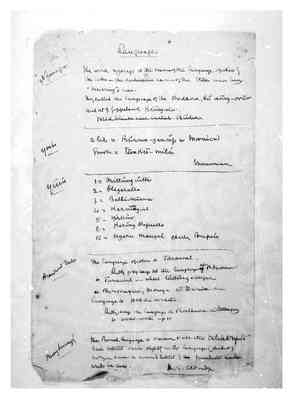 LanguagesNgarego The word ngarego is the name of the language spoken by this tribe – the district name of the tribes men being“Murring” = men.They called the language of the Theddora, Kŭ[n]dūng-orūr and that of Gippsland Kūng-ela.[Wild blacks were called Bŭdara -crossed out] 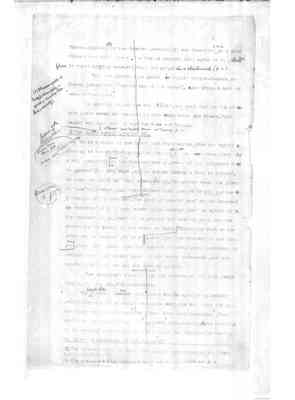 {Tharan-galk-bek?] (1) or the Gumtree -country. It was described to me as a land where there were trees. The tribal legends also speak of it, as the place to which Bunjil ascended with his people in a whirlwind (p -).

With the Kurnai this place is called blinte-da-nurk or freely translated "bright sky of the cloud", also bring-a nurt or "bone-of-the-cloud".

The Ngarigo called the sky Kūlŭmbi, and said that on the other side there was another country with trees and rivers. This belief was also held by the Theddora and Woigal. ( other [?] come in here).

It is thought by the Dieri that when anyone dies his spirit goes up to the [Pirri-wilping?], the sky, but also that it can roam about the earth invisibly. *If the deceased was a person of any influence food is placed for many days, and in winter months a fire is lighted, so that the ghost may warm himself at it. The ground round the grave is carefully swept, and they believe that on it they can see the footsteps of the deceased. The kind of inquest held on the deceased is described at p , also shows quite clearly that the spirit of the deceased is supposed to be present and able to point out the person who is guilty of his death by magic. Should the food at the grave not be touched, it is supposed that the deceased is not hun-gry.* They also think that the spirit can establish themselves in ancient trees and always [speak?] of [much?] with reverence, and are careful that they are not cut down or burned.

The [Warriayeri?} thought that the spirits of the dead went up to the sky, [Wai-irre-warra?]. 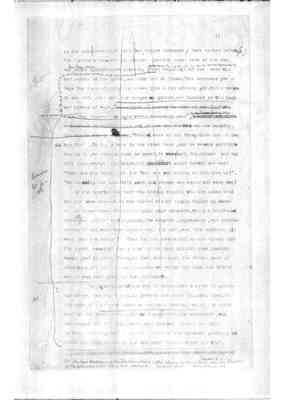 11in the sky-country. Of such men, called Birraark, I have spoken before (1)The Thaddora believed in another land the other side of the sky, and that there were blackfellows therein. They believed that the dead will not remain in the grave, but come out at times. This accounts per-haps for their digging the grave like a cylindrical pit, with a recess at one side into which the corpse was placed, and blocked in with logs and pieces of wood. [An account of burial by some of the Theddora - crossed out][which was reported to me, is worth recording here, - crossed out][statements by enquiry from one of the men who was at the burying. - crossed out][His account was as follows.- crossed out] “When we were at the Snowy River one of the old men died. We dug a hole in the river bank, and as we were puttinghim in it we thought that he moved. We were much frightened and all fell back, except old Nukong (1) who stood forward and said “What are you doing that for? Why are you trying to frighten us?”“We rammed up the hole with wood and stones and earth and went away.”

By the Ngarigo the body was tied up tightly with the knees bent and the arms crossed. It was buried simply rolled up and naked or in other cases dressed in full male ornament, with the bridda bridda (2) and painted with pipe clay. The weapons, implements, and bridda bridda if not worn were buried with the body, and “the bulabong (3) went into the scrub.” They had the same belief as the Kurnai that the ghost remained for a time in the bush killing game, making camps, and lighting fires. In fact, continuing its former mode of existence. But in this the bulabong ws [sic] better off than the Mrarts who it was said lived on sow thistles. (4)The Ngarigo practice was to cross over a river if possi-ble after burying a body, to prevent the ghost following them. An instance of this came under my notice. A leading man of the tribe died at the Snowy River and was there buried. The survivors, who had camped not far away, were much alarmed during the night by what they supposed to be the ghost of the deceased prowlinground the camp, as one of the men said “coming after his wife.”

1) The last Headman of the Theddora tribe, after whom a mountain near the Tambo River us named2) The Kilt worn by the men before [??]3) spirit state

Show pages that mention Theddora in all works