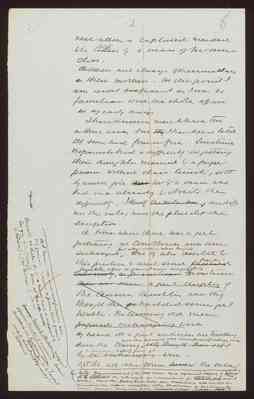 3 8never allow a captured maidento be [taken - crossed out] kept by a man of her ownclass.

Children were always of the same classas their mother. On this point Iam most confident as I was sofamiliar with the whole affair in my early days.

I have known men to have twoor three wives but [they - crossed out] I have been toldthat some had four or five. Sometimesthe parents had a difficulty in gettingtheir daughter married to a properperson within class limits, so thatthey would give [them - crossed out] her to a man whohad one already to obviate thedifficulty. I think [the rule was - crossed out] one wifewas the rule, and the plurality theexception.

Yet at all other times [however - crossed out] the men

[footnote at the end of the page]Note - This command by the old men may be explained I think by [believing - crossed out] considering that they [considered - crossed out] began using the calamity as a punishment for [departing from - crossed out] disregard of this [?errent?]usage. One of the Darling River tribes near Menindie told me that he considered the rapid extinction of the blackfellows as being causedby their present disregard of the customs of their fathers. AWH

Show pages that mention Roeburn in all works