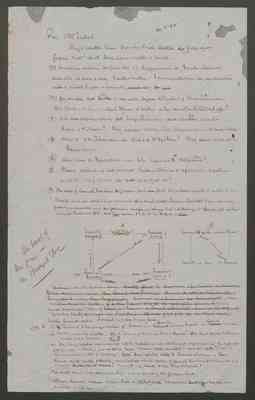 Sorry to trouble him but his each letter is full of Gordian Knots which I have benn unable to untie. -(1) How do you explain the fact that 17. Kuigarinaui is [Junta- Kararu]and also in some cases Junta-Materi. I am unable to see any explanation unless a mistake by your informants, (2) You mention (16) Bertha is the sister Itjana the husband of (19) Pungudu KadinaBut Bertha is Kareru and Itjana is Maleri - how can they be brother and sister? (3) How does it come about [that- crossed out] 19 Pungudu Kadina and (24) Auton can be Kaka & Turnara? They appear to me to be Kami-mara to each other.(4) How is 22 Tilimarana the Kaka of Witjibarri They seem to me to be Kamimara! (5) How does 21 Jinjamaterina come to be Ngaudri to (12) Witjibarri? (6) Please explain in what manner Kaka-tidnara = Ngandri - ngatanias in the case of 15 + 16 and 13. 14. [17. 18 - crossed out].. 20?(7) The case of Samuel has been a gordian Knot which I have been unable to untie so far. I therefore send you what I have made out which kindly correct - because I feel that I cannot have properly understood you - the following diagram shows his relationships to Bertha (16) and her daughter Sussanna (40). His true mother I take to be Judith-

I extract the following from your letter:Diag A (1) "Samuel is the younger brother of Susanna" - also his mother Judith and [?Susanls?] mother(2) Bertha must be Sisters. (2) "Samuel is the younger brother of Bertha" if so he is [Kaka to Susannaand she is his Tidnara.(3) "The [?Karui?] relation was converted into the [??] in order that Samuel might not be in the difficult if being unable to obtain a noa so that his Kaka-Tidnara relation was altered to one of [??] in order that he might have a sister to exchange". If the "[Karui?]relation relates to Samuel & Susanna - then Samuel as the [??] of Bertha - must be held to be the father of Samuel the [Karui?] of Susanna - that is of himself. Diagram B - Which is the true solution? (This matter requires to be cleared up before we can get rid of the gordian knot. After all Samuel appears to have had a (tribal) sister Wonk Karin (30) - has she not

Show pages that mention Judith in all works