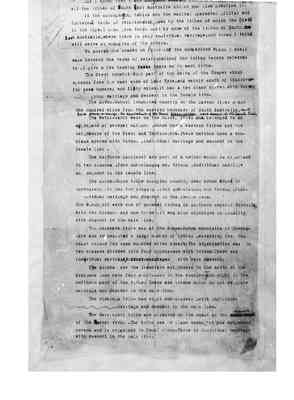 [top of page seems to have been cut off]But I think that I can show good [rest of line missing]all the tribes of South East Australia did at one time practise it.

In the accompanying tables are the marital, parental, filial andfraternal terms of relationship, used by the tribes of which the Dieriis the type. I also give the those used by some of the tribes of SouthEast Australia, where there is only individual marriage, and these I thinkwill serve as examples of the others.

To assist the reader in following the comparison which I shallmake between the terms of relationship of the tribes herein referredto, I give a few leading facts as to each tribe.

The Dieri inhabit that part of the delta of the Cooper whichextends from the east side of Lake Eyre, and mainly south of that riverfor some hundred and fifty miles. It has a two class system with totemsgroup marriage and descent in the female line.

The Kurnandaburi inhabited country on the Barcoo River aboutone hundred miles from the eastern boundary of South Australia, andhad group-marriage, the equivalent of the Dieri tippa-malku , and descent in the female line,

The Wathi Wathi were on the Murray river and belonged to anaggregate of several nations whose north western tribes are theneighbours of the Dieri and Yantruwunta. These nations hava a two-class system with totems ,individual marriage and descent in thefemale line.

The northern Kamilaroi are part of a nation which is organizedin two classes, four sub-classes and totems, individual marriageand descent in the female line.

The Kuinmurbura tribe occupied country near Broad Sound inQueensland. It had two classes, four sub-classes and totems, indi--vidual marriage and descent in the female line.

The Wurunjeri were one of several tribes in southern central Victoria,with two classes and one totem. It was also organized on localitywith descent in the male line.

The Kaiabara tribe was at the Bunya-Bunya mountains in Queens-land and represented a large number of tribes, extending from thecoast inland for some hundred miles square. The organization was intwo classes divided into four subclasses with totems. There wasindividual marriage with male descent.

TheArunta are the immediate neighbours of the north of theUrabunna, and have four subclasses in the southern and eight in thenorthern part of the tribe. There are totems which do not regulatemarriage and descent in the male line.

The Binbinga tribe has eight sub-classes, with individualmarriage and descent in the male line.

The Narrinyeri tribe are situated on the coast at the mouthof the Murray river .The tribe has no class names, but has exogamoustotems and is organised in local clans. There is individual marriagewith descent in the male line.

[written in left margin at top of page]condense + retype 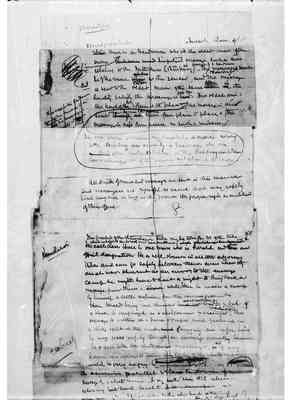 KamilaroiThe practice of the Kamilaroi tribes may be taken from that of the tribe which inhabited the country round west Maitland, [and also of the tribe about Kamilaroi tribe -crossed out]In each class there is one man who is herald and has an official designation. He is well known in all the adjoining tribes and can go safely between them even when they are at war. When sent as an envoy to the enemy's camp he might have to wait a night to bring back a message from them. [Then - crossed out] While there he makes a camp by himself a little distance from the encampment. These Heralds being well known [had no- crossed out] did not need to carry any badge or emblem of office but if a black is employed as a whiteman's messenger, the message is written on a piece of paper and fastened in a stick split at the end. [and -crossed out] Carrying this before him he may pass safely through an enemy's country because he is seen to be the white man's messenger, [for - crossed out] and if any harm were done to him the tribe of the white man would be very angry. As a curious parallel to this [?here is mention?] of amessage by a white man of my note that when returning into South Australia [I was ccompanied- crossed out] a young man of the Yaurorka tribe who had attached[First part of line missing] the to a stage beyond?

[written in left side margin]C. Naseby 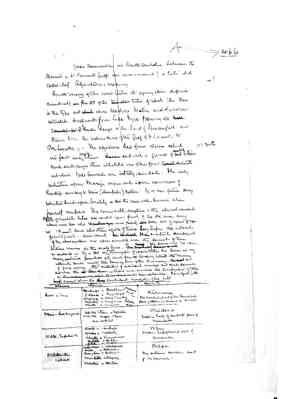 [?] with many of the coast tribes its organization differed considerably [crossed out - in] from that of the [crossed out - two class] tribes of which the Dieri is the type and [crossed out - which] where two classes Materi and Kararu extended southwards from Lake Eyre following the [crossed out - hill] [crossed out - country to] Flinders Range to the head of Spencers Gulf and thence following the western shore of the Gulf of the Vincent. to Port Lincoln (1). The adjadūra had four classes which [(1) quote]in fact were major totems [crossed out - Kari] each with a group of [?] totems and each major totem inhabited one of the four [word crossed out] districts into which Yorke Peninsula was initially divided. The only restriction upon marriage depended upon nearness of Kinship [according?] to their (classification) system. Nor was there any restriction based upon locality as was the case with the Kurnai who [prevent?] mentioned. This remarkable exceptionto the almost universal primitive tribes of [?] tribes was insisted upon firmly by the old men any whom were two who [two words crossed out] were probably [word crossed out] looked over 70 years of age in 18 - ? and who it was spoke of times being before the advent of white people in their country. [three words crossed out] The exceptional development of the class system was also connected with the descent of the totem names in the male line. [Six words crossed out] It seems to be the case as explained in # - that the social organization of coast tribes has been in very many instances peculiar and much frequent [tending?] totems [?] [?] ultimate result namely the breaking down of the class system, [2 words crossed out] and of group marriage, the establishment of individual marriage and male descent and when the [Crossed out totem] class or totems have survived the localization of these in [crossed out - themarrriage in which they ? ?] separate [?]. The [subject?] tribe [crossed out - briefly] [?] shows the [crossed out - class] [?] organization of this tribe 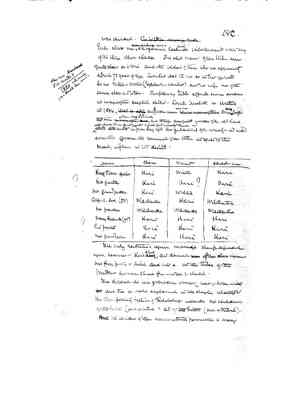 was divided. [crossed out - As to this marriage rule]Each class was = [crossed out - even perhaps] now = exogamic and [two wrods crossed out] intermarried with any of the three other classes. The old men of the tribe were quite clear as to this and the oldest of them who was apparently about 70 years of age insisted that it was so in his youth. He was Wiltu - Wortu (Eaglehawk-wambit) and his wife was of the same class and totem. The following table affords some evidence in support of this [exceptional?] [?]. South Australia was settled in 1804, [crossed out - that is after] and of these men one was [crossed out - who had [?] of them] [crossed out - being] born before that time and the others of a [?] years later [crossed out -[?] after and] are therefore competent to [?] of these old [clans?] under which their grand parents & great grand parents lived and to which still [control?] in force long after the [?] of the [council?] and under even still govern the remnants of the tribe in spite of the missing influence in that district.

The only restriction upon marriage therefore depended upon nearness of Kinship [crossed out - kindred], and descent [crossed out - was] of the these class names was from father to child and [not as?] with the tribes of the Materi-Kararu classes from mother to child. 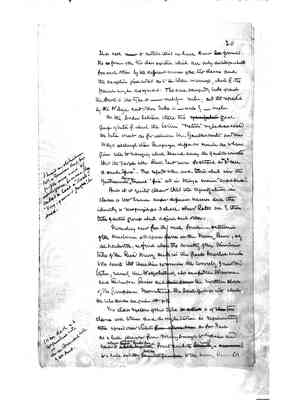 It is well [crossed out - now] to notice that we have now -crossed out - be] found two forms of the two class system which are only distinguishable from each other by the different names of the two classes and the exception just noted as to totem marriage, which for the present may be disregarded. The area occupied by tribes of which the Dieri is the type is ------ miles by -------- miles; and that represented by the Wilya and other pther tribes is ------- miles by ------- miles.

On the border between these two [crossed out - organizations] great groups of tribes for which the term "nation" may be even applied the tribes meet as for instance the Yautruwunta and the Wilya although their languages differ so much as to have given [?] to [asigning?] which I heard among the Yantru wunta that the people to the South East were so stupid as to call (4) a snake "fire". This refered to the word tūrū which in the Yantruwunta language means "fire" and in the Wilya means "carpet snake".

[Left margin note]I heard an old Irishman tell a German that his people were void of intelligence, because they called a Coat a "Rock". "Very ignorant people". he said.

But it is quite clear that the organization in classes is the same under different names and the identity is recognized as I shall ahow later on by these tribes of either group which adjoin each other.

Proceeding now from the most Southern extension of the Mukurra & Kilpara classes in the Murray River, say at Wentworth, we find where the country of the Wembaio tribe of the River Murray ends in the great mallee scrub to the south that there then commences the country of and to the S tribe, named the Wotjoballuk who occupied the Wimmera and Richardson Rivers and [crossed out - their source?] the northern slopes of the Grampian Mountains. The local groups into which this tribe includes are given as [?].

The clan system of this tribe [crossed out - is extended] is of [crossed out - this] two classes with totems and it may be taken as representing tribes spread over Victoria [crossed out - from about [?]] as far East as a line drawn from Maryborough to Colac and next to at least as far as Rivolo Bay in South Australia [crossed out - boundary] - [word crossed out] to a line extending through [crossed out -from Mt Gambier] to the Murray River, (1)

Show pages that mention South Australia in all works