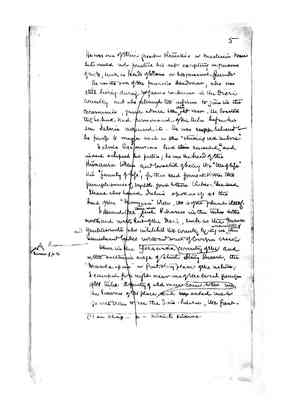 He was one of their great Kūnkis or medicine men but would not practice his art excepting on persons of note, such as Heads of totems or his personal -friends.

He was the son of the previous Headman, who was still living during Mr Gason's residence in the Dieri country and who although too infirm to join in the ceremonies, gave advice to the other old men. He boasted that he had had command of the tribe before his son Jalina acquired it. He was [supp - crossed out] believed to be proof to magic such as [the -crossed out] "striking with the bone".

Jalina Piramurana had [this- crossed out] succeeded to and indeed eclipsed his father; he was the head of the Kŭnaura totem and boasted of being the "tree of life" the "family of life", for this seed forms at times the principle source of vegetable food to these tribes. [The seed -crossed out] I have also heard Jalina spoken of as the head of the "Manyura" totem, that is of the plant itself.

I observed that there were such Pirrarus in the tribes to the north and north East of the Dieri, such as the Yaurorka and Yantruwunta who inhabited the country lying in and to the westward of the Queensland border north and south of Coopers Creek.

When in the country of the Yerawaka and on the southern edge of Sturts Stoney Desert, the "Murda -pirra" or great strong place of the natives, I camped for a night near one of the local groups of that tribe. A party of old men the Pirrarus of that place came to see me, and [req- crossed out] asked me to go with them to see the Pirra - Pirraru, the great -

Show pages that mention Yerawaka in all works