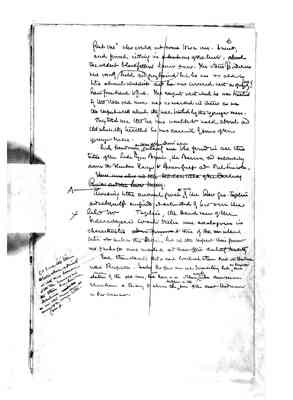 Great one" who could not come to see me. I went, and found sitting in [a hut - crossed out] one of the huts, [about - crossed out] the oldest blackfellow I ever saw. The other Pirarus were mostly grey haired and bald but he was so old as to be almost childish and was covered with a grizzly fell of hair from head to foot. The respect with which he was treated by the other old men was as marked in them as was the respect with which they were treated by the younger men.

They told me that he was unable to walk about andthat when they travelled he was carried by some of the younger men.

Such Headmen as those of the Dieri were certainly [were- crossed out] to be found in all the tribes of the Lake Eyre Basin, the Barcoo, and extending down the Flinders Ranges to Spencer Gulf and Port Lincoln

According to to the account given to me by the Rev. Geo. Taplin and subsequently confirmed and extended by his son the late Mr Taplin, the Head men of the Narrinyeri coast tribe were analagous in characteristics [and in powers - crossed out] to those of the inland tribes such as the Dieri, but in this respect their power was perhaps more marked and their office distinctly hereditary.

Each totem class (1) that is each localised totem and its headman called Rupulli. The office was not hereditary but the Rupulli was [electe- crossed out] chosen by the old men, [but -crossed out] yet here as in other such tribes there seems to have been a tendency to choose the brother or the son of the dead headman as his successor.

(1) I use the termtotem class advisedlyin this case becausewith the naming inthe totems have becomelocalisedas was the case with many of the coast tribes.(see p. )

Show pages that mention Spencer Gulf in all works