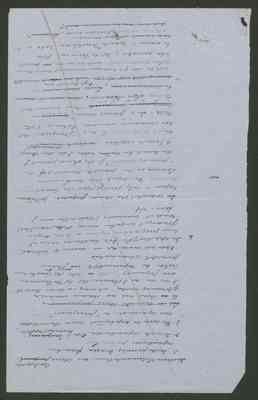 In these statements there are three [proposals - crossed out] conclusions1 In the primary hordes femaleinfanticide prevailed2 Female infanticide led to [exogamy- crossed out] marriage by capture3 The wives so captured and their childrenwere regarded as "foreigners"[Let us consider these proposals= crossed out]As there are no known instancesof "primary hordes" at any rate in [??]I may do as I observe Mr McLennandoes frequently - that is like the Australiantribes as representing to us some of theirpossible characters.

I am not aware +c - down to NeborakIn speaking of Sir John Lubbock's view Ihave fully stated my own as to the originof marriage by capture and this view I wouldrend it unnecessary to call in the [??] offem. inf.

In respect to the third proposal Mr McLennanappears to rely strongly upon the Australian evidence +c down to "will serve"Look at one possible [?condition?] of a "primary horde" for the third point ofthe Australian [tribes - crossed out] tribes I see this clearlya female captive might be regarded as a "foreigner" buther children would belong to thetribe. In a "primary horde" there would not be any class division.Such divisions are incompletewith the idea of a homogenous community having moreor less promiscuity such as are the primitivetribes postulated by Mr McLennan. Stillhe seems to regard a Australian tribe as toa certain extent a parallel case

Show pages that mention Sir John Lubbock in all works