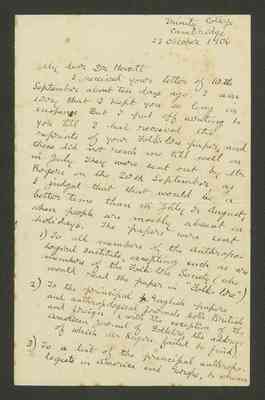 My dear Dr HowittI received your letter of 10thSeptember about ten days ago. I amsorry that I kept you so long insuspense. But I put off writing to you till I had received thereprints of your Folklore paper, andthese did not reach me till well onin July. They were sent out by MrRogers on the 20th September, asI judged that that would be abetter time than in July or August,when people are mostly absent onholidays. The papers were sent1) To all members of the Anthropo-logical Institute, excepting such as aremembers of the Folklore Society (whowould read the paper in "Folklore")2) To the principal English papersand anthropological journals both Britishand foreign (with the exception of the American Journal of Folklore, the addressof which Mr Rogers failed to find).3) To a list of the principal anthropo-logists in America and Europe, to whom

Show pages that mention 23 October 1906 in all works