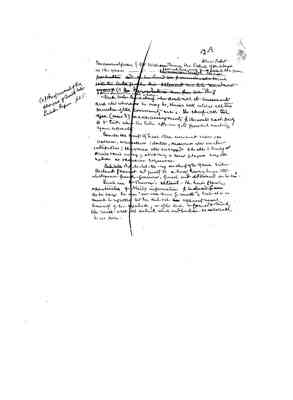 The account given by Mr William Thomas the Black Protector Protector of the aborigines in the years ___ to ___ fall into line with the particulars I have given[crossed out - 4 lines] (1) I have condensed his statments as follows: "Each tribe has a chief who directs all its movementsand who wherever he may be, knows well where all the members of the community are. The chief with the aged (men?) makes arrangements for the route each party is to take when the tribe after one of its periodical meetings again separates.

Besides the chiefs they have other eminent men, as warriors, counsellors, doctors, dreamers who are also interpreters; charmers, who are supposed to be able to bring or drive rain away, also to bring or send plagues among other nations as occasion requires.

[crossed out - Bilibile] Bil-li-bel-la-rey was chief of the Yarra tribe. He stands foremost and justly so as ever having been the whiteman's friend- generous, frank and determined as he was".

Such are Mr Thomas's statements. He had great opportunities of obtaining information from [crossed out - he lived for more] as he says he was "out with them for months", but it is is [sic] much be regretted that he did not [crossed out - rec] apparently availhimself of his approbate, or if he did he failed to sendthe results with that detail which would have been so valuable to us now.

Last edit about 1 month ago by Budja07 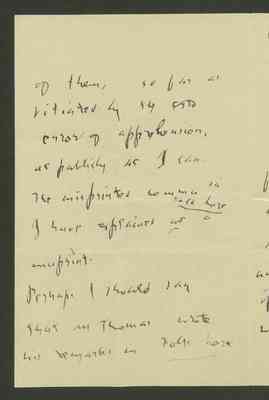 of them, so far asvitiated by [??]error of apprehension,aspublicly as I can.The misprinted comma in Folk LoreI have explained as amisprint. 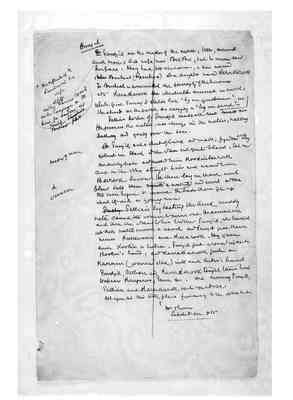 [B- crossed out] Pundjil was the maker of the earth, trees, animalsand men. His wife was Boi Boi, but he never sawher face. They had his children, a son named[Bbr - crossed out] Binbeal (Rainbow 4) and a daughter named KarakarookTo Binbeal is committed the sovereignty of the heavensand to Karakarook [the -crossed out] incidental occurrences on earth.

While great Pundjil stalks like "big one gentleman", inthe clouds on the earth +c carrying a "big one sword" -

Pallian brother of Pundjil made all seas, rivers +cHe governs the waters; was always in the waters, walkingbathing and going over the seas.

Punjil cut a sheet of bark and made figures with claycolored one black and the other not quite black. Put onone curly hair and called him Kookinberrookand on the other straight hair and named himBerrookboorn. He then lay on them and blew into their mouths + nostrils and navel and thetwo men began to move. He bade them get upwhich they did as young men.

Last edit about 1 month ago by ALourie
All 3 records

Show pages that mention Mr Thomas in all works