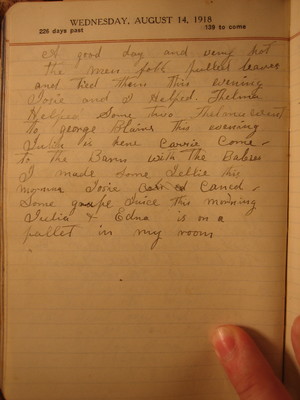 A good day and very hot. The men folks pulled leaves and tied them. This evening Josie and I helped. Thelma helped some two. Thelma went to George Blairs this evening. Julia is here. Carrie come to the barn with the babies. I made some jellie this morning. Josie canned some grape juice this morning. Julia and Edna is on a pallet in my room.

Last edit about 9 years ago by Ben Brumfield 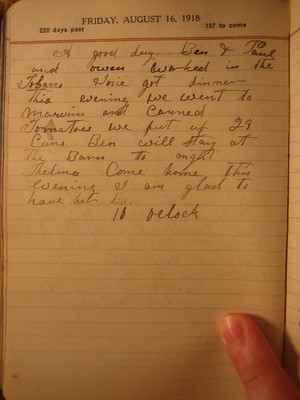 A good day. Ben and Paul and Owen worked in the tobacco. Josie got dinner. This evening we went to Marvins and canned tomatoes. We put up 29 cans. Ben will stay at the barn to night.

Thelma come home this evening. I am glad to have her back.

Last edit about 11 years ago by Ben Brumfield 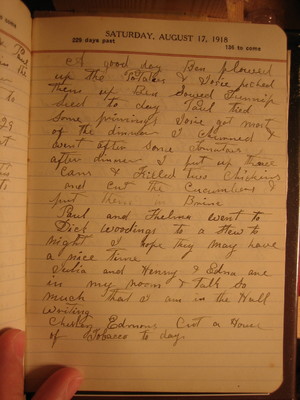 A good day. Ben plowed up the potatoes and Josie picked them up. Ben sowed turnip seed to day. Paul tied some primings. Josie got most of the dinner. I churned went after some tomatoes. After dinner I put up three cans and killed two chickens and cut the cucumbers and put them in brine.

Paul and Thelma went to Dick Woodings to a stew to night. I hope they may have a nice time.

Julia and Henry and Edna are in my room and talk so much that I am in the hall writing.

Last edit about 11 years ago by Ben Brumfield 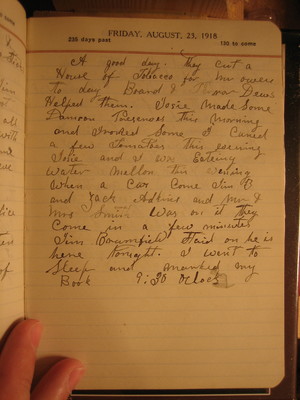 A good day. They cut a house of tobacco for Mr Owen to day. Brand(?) and James(?) Dews helped them. Josie made some damson preserves this morning and ironed some. I canned a few tomatoes this evening.

Josie and I was eating water mellon this evening when a car come. Jim B and Zack Adkins and Mr and Mrs Smith was on it. They come in a few minutes.

Jim Brumfield staid on he is here tonight. [ink smear] I went to sleep and marked my book.

Last edit about 10 years ago by Ben Brumfield 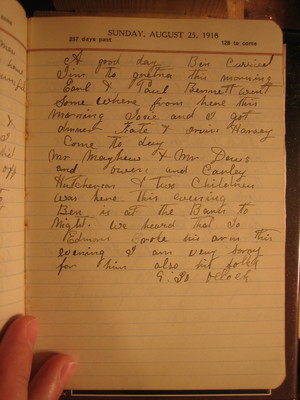 A good day. Ben carried Jim to Gretna this morning. Earl and Paul Bennett went some where from here this morning. Josie and I got dinner. Kate and Irvin Harvey come today.

Mr Mayhew and Mr Dews and Owen and Charley Hutcherson and two children was here this evening.

Ben is at the barn to night. We heard that Jo Edmons broke his arm this evening. I am very sorry for him also his folks.

Show pages that mention barn in all works

Ben Brumfield is researching the people and places mentioned in the Julia Brumfield Diaries. He welcomes correspondence at benwbrum@gmail.com.