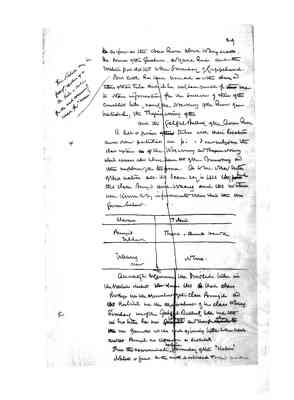 [crossed out - to] as far as the Ovens River above Wangaratta, the source of the Goulburn, and Yarra Rivers and the Western Port district to the boundary of Gippsland.

[Left margin note] This Nation may be [further?] spoken of as the Kuli or Kulin for the word commonly used for "man".

But little has been recorded as to the classes and totems of these tribes and it has only been possible for me to obtain information from the survivors of three of the constituent tribes, namely the Woeworung of the River Yarra watershed, the Thagŭn worŭng of the [space] [space] and the Galgal Bulluk of the Avoca River.

A list is given of [crossed out - these] tribes with their locations and other particulars at p - . I now subjoin the class system [crossed out - as] of the Woeworung and Thagun worung which appears also to have been that of the Bunworung and other neighbours of the two former. As to the other tribes of this nation all that I can say is that they had [word crossed out -?] the classes Bunjil and Waang/Waa and that no totems were known by my informants other than the ones given below.

This the approximate ^western boundary of the "Kulin" Nation is fixed. In the north it extended to within a certain